Following the public release of Photoshop for iPad earlier this month, Adobe has outlined additional features coming to the app in the coming months. 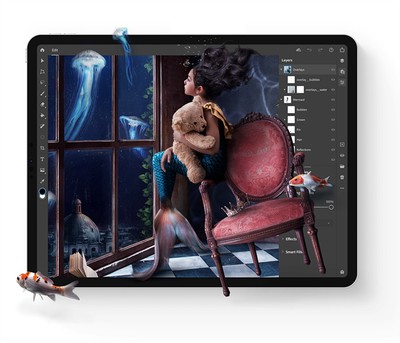 By the end of 2019, this will include a new Select Subject feature that uses Adobe's Sensei machine learning technology to enable users to automatically select the subject of an image to speed up complex selections. And in December, Adobe says its cloud document system will be optimized to be even faster.

In the first half of 2020, Photoshop for iPad will gain additional features, including the Refine Edge brush for selecting soft edges, integration of Lightroom and Photoshop workflows on the iPad, and more.

Photoshop for iPad has received poor reviews since its release and has only a two-star rating on the App Store.

We need a flat fee not a subscription service!

Then don't use Abobe. That ship has sailed.
But there are other options.
Score: 13 Votes (Like | Disagree)

Texh49
We need a flat fee not a subscription service!
Score: 11 Votes (Like | Disagree)

ApfelKuchen
A laptop is a "toy" - there's no way anyone can get serious, professional graphics work done on a display smaller than 27". ?

New tools can subtly or dramatically change an art form. There was a time when professional photographers called 35mm cameras "toys." The negatives were too small, and they lacked tilts and swings (the ability to manipulate perspective by changing the angular relationship of the lens to the film plane). But 35mm combat photography by the likes of Robert Capa proved otherwise. The particular strengths of 35mm cameras in a combat environment (size/weight and speed of use) completely changed our expectations of what a photograph could capture.

In the end, the difference between a professional tool and a toy comes down to whether a person skilled in the use of that tool can produce professional-quality work. And when a new tool comes along, even a "great professional" needs to spend time mastering that new tool. You wouldn't be able to time-transport Thomas Chippendale from his 18th-century workshop into a modern woodworking shop and expect him to turn out masterworks of cabinetry five minutes later.

Owning a particular tool does not make someone a professional, what a person accomplishes with the tool is all that matters. Incredibly sophisticated work can be done with incredibly simple tools; it's often just a matter of how much additional skill or time is required in order to get those great results.

Does it matter whether a render takes one minute or one hour? No, that's just the speed of execution - the ability to do more work in less time. That's not skill, that's not quality; that productivity. Yes, productivity and profitability are part of being a professional, but they are not a measure of quality.

As to Photoshop? I've never used it on a desktop or laptop, and I'm not sure I'll use it on iPad, either. I've always used different image editors. Maybe I've missed out over the years - I'm willing to grant that Photoshop may have capabilities that my favored tools have lacked. But in the end, all that matters is the images that I produce. How I achieved those results is important only to hardware-heads.
Score: 8 Votes (Like | Disagree)

now i see it
if it worked as well as photoshop 5.5 or 6 or 7 nobody would be complaining. Instead of focusing on the fundamentals though, they're aiming for the stars with "machine learning" subject selection.
When has an image cut out with auto selection ever looked natural?
Score: 8 Votes (Like | Disagree)

AgentAnonymous
Of course it got poor reviews. A tablet is nothing more than an expensive toy, and trying to do real work on one (with the sole exception of drawing with a pen, which Photoshop is not for) will be a disappointing experience.
Score: 8 Votes (Like | Disagree)
Read All Comments

Saturday May 30, 2020 4:00 pm PDT by Eric Slivka
Apple today doubled the price for upgrading the RAM on the entry-level 13-inch MacBook Pro, with customers in the United States now being charged $200 to move from 8GB to 16GB compared to the previous $100 upgrade price. Similar increases are seen in other countries, such as moving from €125 to €250 in Germany and from £100 to £200 in the United Kingdom. Current pricing on RAM upgrade for ...
Read Full Article • 272 comments