Apple today send out invites for a surprise media event that's set to be held on Monday, December 2 in New York City, at 4:00 p.m. Eastern Time. 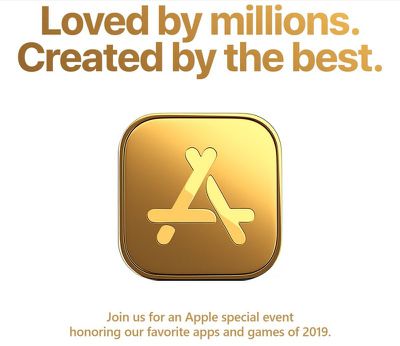 Invitation image via Lance Ulanoff
According to the media invitations, Apple will be honoring its "favorite apps and games of 2019." There is no word on just what that means, and as Apple has never held a similar event, we don't know what to expect. Apple does, however, always share its year-end favorite apps and games, during the first few days of December, so it sounds like this year, the content will be unveiled during a full event and awards ceremony.

It's not clear if any hardware will be introduced at the event, but it seems unlikely given the clear wording of the media invites. We're still expecting Apple to release the Mac Pro and Pro Display XDR in December, so there could be a mention of an official launch date, but beyond that, no more hardware refreshes are rumored for this year.

nattK
So weird that the text at the bottom is in Myriad Pro instead of San Francisco. Is it even legit? So weird that they would overlook something like that
Score: 13 Votes (Like | Disagree)

Jeaz
It's all inline with their shift from hardware focused company to service focused. It's all about the content on their devices, and what you can do, not the lastest hardware gizmo.
I can't say I expected this, but it does make sense.
Score: 10 Votes (Like | Disagree)

Wednesday January 26, 2022 8:56 am PST by Joe Rossignol
Benchmark results have started to surface for MSI's new GE76 Raider, one of the first laptops to be powered by Intel's new 12th-generation Core i9 processor. Intel previously said that its new high-end Core i9 processor is faster than Apple's M1 Max chip in the 16-inch MacBook Pro and, as noted by Macworld, early Geekbench 5 results do appear to confirm this claim, but there are several...
Read Full Article • 305 comments