Ahead of the imminent launch of Apple's new 16-inch MacBook Pro, several benchmark results have appeared on Geekbench that allegedly come from a Mac model designated "MacBookPro16,1" and, if true, confirm some of the machine's rumored hardware specifications. 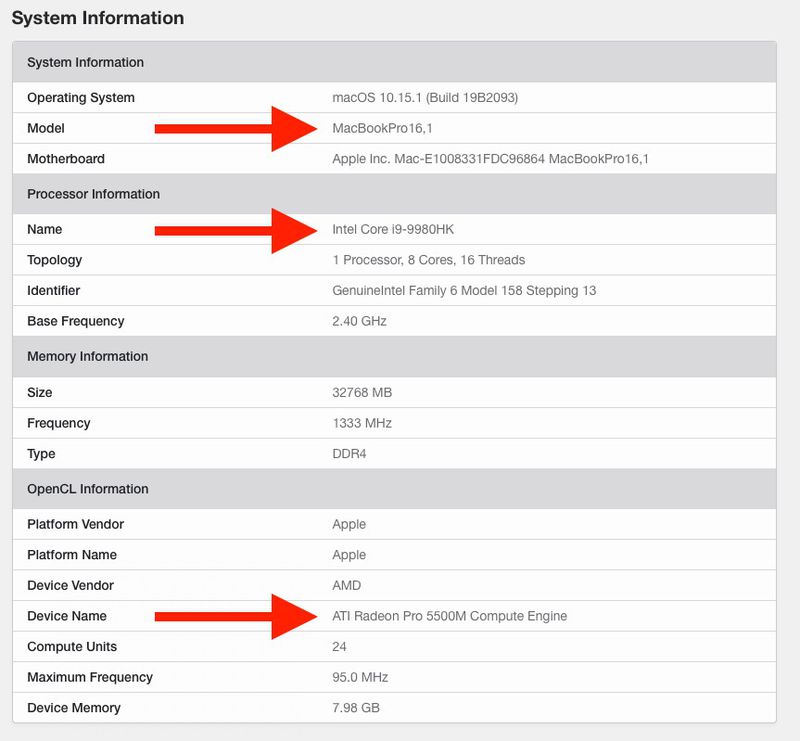 Many of the results indicate that the 16-inch ‌MacBook Pro‌ will feature Intel 9th-generation Coffee Lake Refresh processors, which would be in line with the 15-inch ‌MacBook Pro‌ released in May. Some benchmarks show an 8-core Core i9 processor with a 2.4GHz base clock speed.

You should visit a professional audio studio and see if you want to revise this statement.
Rating: 4 Votes

thisisnotmyname
What, no 11th gen processors?! I'm angry that Apple is already out of date for time travelers from the future! /s
Rating: 3 Votes

I may not be considered a good "pro" then, I have 4 businesses (60+ workstations) with a majority being 6-9 year old computers that are still getting the job done perfectly fine.
I have a total cost of ownership per workstation I have to think of and pay for. So until the performance of the machine is costing money to operate and inhibiting production, it does not get replaced.
Rating: 2 Votes

bsbeamer
Looks to be about right in the middle between size and weight of a late 2013 MBP 15" and a mid 2019 MBP 15". Never really had issues lugging my 2013 MBP 15" around or fitting into camera backpacks. Might be the first initial version of an Apple product I'm purchasing since the switch to Intel CPUs.

Yeah that's the same CPU as my current MBP.

GPU may be a little quicker.

I do like that display pushed closer to the edges style.

The new GPU is just about twice as fast as the 560X according to Apple, and the Geekbench score backs that up. Great news!
Rating: 1 Votes

Well, I am. I held off the previous generation because it was faulty by design. Also, I just came back from one of the top-end color grading suites and they're using a cheese grater Mac Pro configured with some insane specs. High spec machines actually stay relevant much longer than your average consumer MacBook Air. A 10 year old top spec Mac Pro will still outperform anything you can buy today. My 6 year old MacBook Pro can still handle grading raw footage fairly well, though it can't play it back smoothly, hence the need for an upgrade.
Rating: 1 Votes
[ Read All Comments ]