The iOS 13.3 update that is currently available to developers and public beta testers has a new Safari feature that supports NFC, USB, and Lightning FIDO2-compliant security keys.

This option was activated in the first beta of iOS 13.3, but in the second developer beta, Apple has added details about it in the release notes. 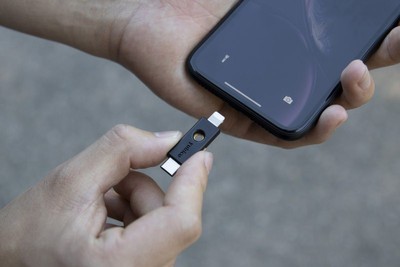 With the iOS 13.3 update, Safari will support physical security keys like the Lightning-equipped YubiKey, which can be used for more secure two-factor authentication.

Yubico announced the YubiKey 5Ci back in August, but at the time of launch, it was of limited usefulness because it did not work with Safari, Chrome, or other major browsers, though it was compatible with apps like 1Password.

With Safari support, the YubiKey 5Ci is a legitimately useful tool that can be more convenient than software-based two-factor authentication because there's no need to enter a security code -- you simply plug it in to an iPhone or Mac (there's also a USB-C connector) to authenticate. Support for FIDO2-compliant USB security keys using WebAuthn was previously added to Safari 13 in macOS.

Other NFC, USB, and Lightning-based security keys will also work with Safari following the iOS 13.3 update. There's no word yet on when iOS 13.3 will be released, but we may see it sometime in December after a few more weeks of beta testing.

Willing to bet you will eat these words by this time next year.

All our security standards are extremely weak and / or have been hacked so we need new ones desperately. 2FA is going to be the savior of doing anything wallet related on your computer.

The reason this is fantastic news is that it will allow mass adoption of way better, way more convenient, way more mass compatible security.
Score: 2 Votes (Like | Disagree)

Count me in good sir! At least 8 of us are taking internet security seriously!
Score: 1 Votes (Like | Disagree)

And notice how devoid of the usual comments ("about time!", "what could go wrong", "how about you fix your software, Tim.", "X dollars? that's insane!", "insert dad joke here") this thread is. People are more likely to complain about what they don't quite fully understand but not about what they know nothing about IMHO.
Score: 1 Votes (Like | Disagree)

FIDO is that wonky thing where where the site is what is actually storying your keypair, but with you having locally encrypted it so it can give it to you so you can decrypt it so you can use that to verify the public half of the keypair that the site is also keeping?

Should just do something sensible like SQRL, or really any other solution.

Seriously, Gibson is a hack and a charlatan, no one serious in the industry respects him. There were several sites that debunk what he spewed, but they just stopped being maintained over 15 years ago because there was already too much information. Gibson total made things up (Socketgate?).

U2F which FIDO2 is based off of is well reviewed, and now included in the W3C specification through WebAuthN.
Score: 1 Votes (Like | Disagree)
Read All Comments

Thursday May 13, 2021 10:32 pm PDT by Sami Fathi
A new rumor suggests that Apple will announce the third-generation AirPods and the recently rumored HiFi, or high-fidelity Apple Music tier, on Tuesday, May 18, via a press release on its website. The new rumor comes from Apple YouTuber Luke Miani who shared the alleged exclusive news with the AppleTrack website. According to the YouTuber, Apple plans to release the next-generation AirPods...
Read Full Article • 155 comments