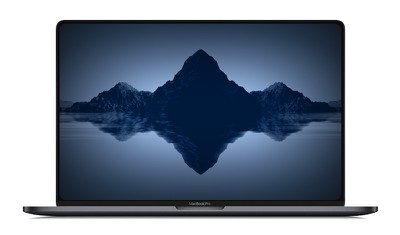 16-inch MacBook Pro concept
"We were expecting an announcement in October," Ubrani said in an email, according to Crothers. October came and went without an announcement, but Ubrani added that his research firm is "starting to see early signs" of the notebook within Apple's supply chain. "However, the timing of this is still uncertain," he said.

Crothers said he has heard similar, writing that "a source in Asia who talks to the Apple supply chain told me over the weekend that the 16-inch [MacBook Pro] is in production but the release date is unclear."

This information lines up with a recent DigiTimes report that claimed Apple will begin receiving volume shipments of the 16-inch MacBook Pro this quarter, possibly to sidestep a 15 percent import tariff on notebooks slated to take effect December 15. If accurate, mass production is likely underway.

Rumors suggest the 16-inch MacBook Pro will feature slimmer bezels around the display, a more reliable scissor switch keyboard, a standalone Touch ID sensor, and possibly a much-requested physical Esc key. Pricing is unknown, but would likely be higher than the $2,799 high-end 15-inch MacBook Pro.

MacNut
It just sounds like a big troll at this point. “The 16 is coming someday maybe”
Score: 22 Votes (Like | Disagree)

The Clark
I've decided that this is the last time I'm going to allow myself to get baited by these new MBP rumours. It will happen when it happens, I need to accept that lol.
Score: 17 Votes (Like | Disagree)

Oh my! I don’t understand the need to replace your macs so soon!, I have an MacBook Pro 2012 with upgraded ram to 16 gb, runs photoshop, after effects and iMovie just fine!

am I missing something m?
Score: 17 Votes (Like | Disagree)

Lobwedgephil
My guess is whenever the Mac Pro releases, hopefully soon.
Score: 15 Votes (Like | Disagree)

It just sounds like a big troll at this point. “The 16 is coming someday maybe”

At this point, I expect it (And the non-butterfly keyboard) to come out shortly after the G5 PowerBook...
Score: 13 Votes (Like | Disagree)

basket123rocks
Optional touch bar and physical escape key and I'm a buyer. Will finally be able to upgrade from my 2014 MacBook Pro.
Score: 12 Votes (Like | Disagree)
Read All Comments

Friday June 18, 2021 9:41 am PDT by Sami Fathi
After a long wait, YouTube for iOS is officially gaining picture-in-picture support, allowing all users, non-premium and premium subscribers, to close the YouTube app and continue watching their video in a small pop-up window. In a statement to MacRumors, YouTube says that picture-in-picture is currently rolling out to all premium subscribers on iOS and that a larger rollout to all US iOS...
Read Full Article • 163 comments

Friday June 18, 2021 11:36 am PDT by Juli Clover
With iOS 15 and macOS Monterey, Apple is adding several quality of life improvements, which are designed to address some of the complaints that people have had with these operating systems for years now. Subscribe to the MacRumors YouTube channel for more videos. In our latest YouTube video, we're highlighting some of our favorite "fix" features that address long-running problems in iOS and...
Read Full Article • 120 comments