Following the release of iOS 13.2 beta 2 yesterday, some 2018 iPad Pro owners found that the update failed to install properly, ultimately bricking their tablets and requiring a full restore. 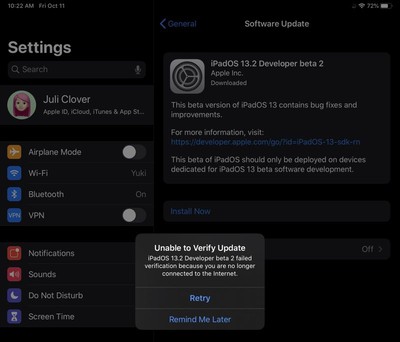 We've seen several complaints from ‌iPad Pro‌ owners who were affected by the issue, and in some cases, even a restore from DFU mode failed to work. From the MacRumors forums:

My ‌iPad Pro‌ 11" is in the same position, it failed during the update of iOS 13.2 beta 2. What you can try is putting it into DFU mode (press volume up, volume down, then hold power for 5 or so seconds) and plug it into iTunes via cable to restore it that way.

However, unfortunately mine gets an error when i try this so i have an Apple appointment tomorrow to get them to fix it.

Amid these reports, Apple appears to have pulled the iOS 13.2 beta 2 update for the ‌iPad Pro‌ as attempting to install the software at this time now produces an error message that the update was unable to be verified because of a lack of an internet connection, despite a connection being available.

Apple appears to have been blocking the iOS 13.2 beta update from the ‌iPad Pro‌ as of last night, and the company likely has a new version in the works that is safer to install. For now, ‌iPad Pro‌ owners should avoid attempting to install iOS 13.2.

MartyF81
Can we not use the term "Bricking" when the device can be made to work again via a restore.

Bricking means... the device is now equal to a brick. A heavy useless thing. If it can be made to work again ... it is not a brick.
Score: 81 Votes (Like | Disagree)

Can we not use the term "Bricking" when the device can be made to work again via a restore.

Bricking means... the device is now equal to a brick. A heavy useless thing. If it can be made to work again ... it is not a brick.

Did you read the article? Some users are stating they are even unable to restore in DFU mode. I think the term is used correctly here.
Score: 22 Votes (Like | Disagree)

Can we not use the term "Bricking" when the device can be made to work again via a restore.

Bricking means... the device is now equal to a brick. A heavy useless thing. If it can be made to work again ... it is not a brick.

ssimonvii
Glad you guys are finally calling out some of the recent horrific iOS bugs. Too bad you ignored my tip about all of the iCloud photo issues going on.
Score: 10 Votes (Like | Disagree)

I7guy
Apple how is this possible. A beta product that had a software issue? /s.
Score: 7 Votes (Like | Disagree)

Did you read the article? Some users are stating they are even unable to restore in DFU mode. I think the term is used correctly here.

I think people are confusing recovery mode with DFU mode, which are different. The user they even quoted in the article was not doing the proper steps to even put the iPad in recovery mode. If the devise can be restored without replacing the hardware, it’s not “bricked.”
Score: 7 Votes (Like | Disagree)
Read All Comments