Apple has delayed the introduction of iCloud Folder Sharing in macOS Catalina until spring 2020, according to its website. 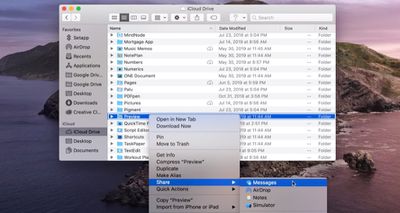 The key cloud storage feature has spent months in development and would have allowed users to share folders in their iCloud Drive with other Apple users via a private link.

It first appeared in early beta versions of iOS 13, before it was pulled prior to the official release for iPhones and iPads last month after problems arose during testing. As expected, ‌iCloud‌ Folder Sharing hasn't made it to the Mac either. macOS Catalina was launched on Monday.

In early beta versions of macOS Catalina, right-clicking a folder in ‌iCloud Drive‌ revealed a submenu that allowed you to generate a private link to the folder and share it via AirDrop, Messages, Mail, or with people in your contacts.

Anyone who received the link was able to access the folder in ‌iCloud Drive‌, add new files, and stay up-to-date with the latest file versions.

On its macOS Catalina features page, Apple says ‌iCloud Drive‌ folder sharing is now "Coming this spring." In contrast, on its iOS 13 features page, Apple says the feature is coming to iPhones and iPads "later this fall," although it's still unclear whether Apple just hasn't updated the page to reflect the extended delay. Either way, the latest iOS 13.2 beta 1 still does not appear to support the function.

As it stands, it's only possible to share individual files in iCloud Drive, which puts it at a significant disadvantage when compared to rival cloud-storage services like Google Drive and Dropbox, which have provided folder-sharing capabilities for years.

If you still want to use ‌iCloud‌ to share multiple files, you could try sharing a compressed zip containing several files, or creating a sparseimage file using Disk Utility and putting files in that for sharing over icloud. Otherwise, an alternative cloud service is suggested for now.

itsmilo
Cuz it’s so hard to do and never done before by any cloud service ever!
Score: 18 Votes (Like | Disagree)

AeroZ
I mean why is Apple doing the one release per year cycle if they’re not able to deliver? They’re not able to even deliver stable new macOS version not to mention the highly promoted new features that they then postpone every year now. The stability and reliability of their software suffers greatly and it seems that it’s getting worse year after year.
The release cycle is more like:
July-sept/oct - alpha test
Sept/oct-jun - beta test

If lucky the 10.1x.6 might be stable enough until the cycle starts again.
Score: 16 Votes (Like | Disagree)

XXPP
"The stability and reliability of their software suffers greatly and it seems that it’s getting worse year after year.

"The stability and reliability of their software suffers greatly and it seems that it’s getting worse year after year.

This is not true.

At this point I’m convinced people just come on this forum and come online in general and just say whatever they want even if it is completely incorrect lmao.
Score: 10 Votes (Like | Disagree)

"The stability and reliability of their software suffers greatly and it seems that it’s getting worse year after year.

This is not true.

You’re right. It’s not getting worse. It’s been bad for years.
Score: 9 Votes (Like | Disagree)
Read All Comments