Kuo: High-End iPad and MacBook With Mini-LED Displays to Launch Between Late 2020 and Mid 2021 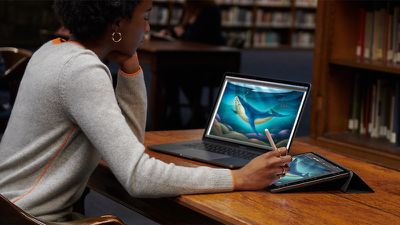 In a research note for TF International Securities, seen by MacRumors, Kuo added that the iPad and MacBook displays will each use approximately 10,000 LEDs, compared to 576 in Apple's upcoming Pro Display XDR. Each LED is said to be below 200 microns in size, significantly smaller than those in the Pro Display XDR.

Kuo previously said the iPad and MacBook models will have 10-12 inch and 15-17 inch display sizes respectively, and he also expects them to be high-end devices due to costly Mini-LED display components. Altogether, that means these will likely be iPad Pro and MacBook Pro models, but Kuo has not specified.

Although mass production of medium-sized OLED displays has gradually improved, and the wide color gamut performance of OLED is comparable to that of Mini-LED, Kuo believes Mini-LED is Apple's first choice to avoid burn-in issues and to reduce its dependance on Samsung for supply of OLED displays.

LG Display will supply the Mini-LED display panels, while other Mini-LED component suppliers will include Epistar, Zhen Ding, Radiant Opto-Electronics, Nichia, Avary Holding, and TSMT, according to Kuo.

Kuo believes the Mini-LED displays will allow for thinner and lighter product designs, while also offering good wide color gamut performance, high contrast and HDR, and local dimming, which dims the backlight behind areas of the screen that are displaying black while keeping the bright parts of the screen bright.

satchmo
If you thought the current iPad Pro and MBP’s were already expensive, you ain’t seen nothing yet.
Score: 26 Votes (Like | Disagree)

It's not the material cost that inflates the final cost of the product to the consumer, it's Apple inflating the price itself by including keywords such as "Pro" :P
Score: 19 Votes (Like | Disagree)

Mr. Dee
Otherwise known as the 'cost an arm and a leg updates'.
Score: 10 Votes (Like | Disagree)

If you thought the current iPad Pro and MBP’s were already expensive, you ain’t seen nothing yet.

If that’s the case, then Apple ain’t seen nothing yet when it comes to falling sales.
Score: 7 Votes (Like | Disagree)

Still not comparable with OLED, but a step up from the current LCD.

While contrast and black level won't be comparable, lack of permanent burn in (which is almost a certainty for many common computer workflows) and brighter peaks make mini-LEDs much more desirable.
Score: 6 Votes (Like | Disagree)
Read All Comments