At an event in Seattle, Amazon today unveiled a series of new Alexa-enabled Echo products, ranging from a new high-end speaker to a lamp.

Amazon's Echo Studio, a new higher-end version of its Echo smart speaker, is designed to compete with Apple's HomePod. The Alexa-equipped Echo Studio, which is priced at $199, supports 3D Dolby sound and, like the ‌HomePod‌, is designed to optimize sound based on the layout of a room. 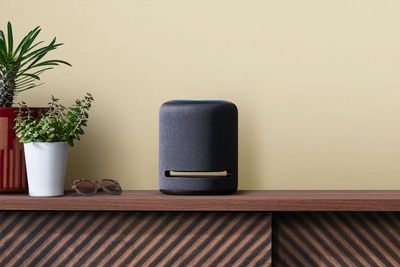 Image via The Verge
The Echo Studio features three mid-range speakers (left, right, and top) along with a directional tweeter and a 5.25-inch subwoofer for bass and improved sound. Amazon is working with record labels that include Sony, Universal, and Warner Music Group on music tracks that support Sony 360 audio.

The Echo Studio is able to connect to 4K Fire TV devices and when Atmos-encoded content is played, the speaker will be engaged to "fill the room with sound."

In addition to a ‌HomePod‌ competitor, Amazon also debuted a new product designed to compete with the AirPods. The Echo Buds, priced at $130, are Amazon's first Echo wearable that offers hands-free access to Alexa.

Amazon says the earbuds deliver excellent sound with crisp, clear vocals and dynamic bass, plus they're equipped with Bose Active Noise Reduction technology. The Echo Buds last for five hours and have a case that adds additional battery life for up to 20 hours.

Amazon also unveiled a new version of its main Echo smart speaker today, which features improved sound quality with new Neodymium drivers and a 3-inch woofer. Priced at $100, the speaker is said to have stronger bass, and clearer mids and highs. The speaker looks similar to prior Echo speakers, but comes in a new dark blue color.

The Echo Show 8, an upgraded version of the Echo Show 5, also debuted at Amazon's event. It features an 8-inch display, crisp audio, and a sleek form factor. It's priced at $129.99, and customers can now choose from three screen sizes: 5.5 inches, 10 inches, and the new 8-inch model.

For kids, Amazon introduced the Echo Glow, a multi-color smart lamp that pairs with Alexa. Priced at $30, Echo Glow can light up with different colors, mimic a flickering campfire, offer a Sleep Timer, or work in "dance party" mode with music and lights (an option coming soon).

A new Echo Flex device ($24.99) can be placed anywhere in the home, plugging right into a wall outlet. There's a small speaker that's optimized for Alexa's voice, and there's a USB charging port. Amazon is also allowing developers to customize the port, and accessories that include a motion sensor and nightlight are coming.

Amazon even debuted a new Alexa-equipped Smart Oven that can cook common foods through Alexa voice commands. Priced at $250, it is a combination microwave, convection oven, air fryer, and food warmer.

A new product, Echo Frames, is part of a program Amazon is calling "Day One Edition." Amazon is making a limited number of Day One Edition products, and if they prove popular, Amazon will make more.

Echo Frames are Alexa-enabled glasses that look like regular prescription glasses. There's no camera, but they offer Alexa voice access.

Another Day One Edition product is the Echo Loop, an Alexa-enabled smart ring that has two microphones that can be activated with a tap.

Amazon is adding a Multilingual Mode to its devices that will let customers interact with Alexa in multiple languages at one time. Three pairs will be available at launch on October 7: in the United States - English and Spanish, in India - Indian English and Hindi, and in Canada - Canadian English and French.

Alexa is also becoming more emotive and expressive thanks to neural text to speech technology, and Alexa can recognize when a customer gets frustrated when something is wrong, resulting in adjustments to Alexa responses. This feature will be rolling out in early 2020.

There's also a new option to add celebrity voices to Amazon devices to change Alexa's voice. Celebrity voice options will be available for $0.99, and the first one, coming later this year, is going to be Samuel L. Jackson's voice.

Amazon customers can opt in to a new auto delete option that will see voice recordings older than three months or 18 months automatically deleted on an ongoing basis. The feature is accessible in the Privacy Hub for Amazon devices.

As for non-Echo Amazon-owned brands, Amazon unveiled a new version of the Eero mesh Wi-Fi system, a Ring alarm retrofit kit, an updated Ring Stick Up Cam ($99), and a new Ring Indoor Cam ($60).

Amazon is adding Wi-Fi specific skills that will let device users do things like pause the WiFi for dinner or turn on the guest WiFi, which will work with the new Eero and compatible ASUS and TP-Link routers (this fall). Starting next year, it will also support devices from Arris and Linksys.

Amazon is offering pre-orders for its newly announced devices starting today, with devices set to ship out in the near future.

topgunn
My wife and I were joking about many smart devices we have now. I laughed. My wife laughed. Alexa laughed. Good times.
Score: 60 Votes (Like | Disagree)

zorinlynx
Amazing how many people are willing to put Amazon's microphones in every corner of their house.

I don't even have "Hey Siri" enabled on my phone. It feels so creepy to have something always listening.

brinary001
Amazon's "ecosystem" (if they even have one...) is a mess and I have no interest in any of their hardware, but that being said, competition is a good thing, and I sure hope Apple takes note of that $199 price tag on the HomePod competitor
Score: 22 Votes (Like | Disagree)

There's also a new option to add celebrity voices to Amazon devices to change Alexa's voice. Celebrity voice options will be available for $0.99, and the first one, coming later this year, is going to be Samuel L. Jackson's voice.

OK... this. Now you have my attention.
Score: 18 Votes (Like | Disagree)
Read All Comments