iPhone 11 Review Roundup: Improved Camera, Battery Life, and Performance Result in the iPhone for 'Just About Everybody'

The iPhone 11 is set to launch this Friday, September 20, and in advance of that release date the first reviews for the smartphone have begun appearing online. Apple has provided review units of the ‌iPhone 11‌, ‌iPhone 11‌ Pro, and iPhone 11 Pro Max to media outlets, but this article will focus only on the ‌iPhone 11‌ and you can check out our separate ‌iPhone 11‌ Pro review roundup right here. 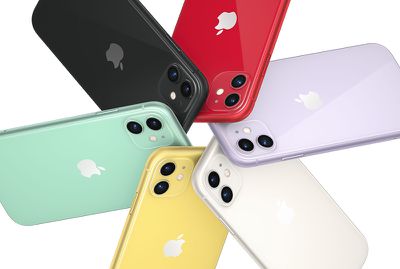 As the lower-cost device, the ‌iPhone 11‌ lacks some of the hardware and software features of the Pro line, but numerous reviewers pointed out that the line between the 11 and the 11 Pro has blurred even more this year. In short, this will likely be the iPhone that is the best choice for most customers this season.

Wired echoed many of these sentiments, calling it the ‌iPhone‌ for "just about everybody" and applauding the smartphone's camera upgrade, solid battery life, low cost, and the speed of the A13 Bionic processor. The site particularly appreciated Apple's no-nonsense UI design for the camera app, pointing out how this improves the camera as a whole, even if it might not be as good as others on the market.

It would be a stretch to say that the camera on the iPhone 11 has wowed me or has set a new standard that other phone makers will have to race to match. The iPhone 11 Pro, with its funky three-lens camera module on the back, is noticeably better. But one area where Apple deserves credit is in the overall packaging of its camera features and the design of the app’s interface.

Smartphones are now cluttered with so many features that it can be hard to figure out what’s what, which can actively discourage people from trying all the newfangled things. On many premium Android phones, for example, the wide-angle icon is a cluster of—trees? When you select the Pro mode on Samsung’s Galaxy Note10+, there are no fewer than 17 photo options available, some of which cut into the frame of the viewfinder.

Ultimately, Wired noted that the ‌iPhone 11‌ is an impressive device but Apple hasn't done anything innovative with the base model ‌iPhone‌ this year. The site pointed out last-generation LCD technology, the lack of an in-display fingerprint sensor, and other features, but still described the ‌iPhone 11‌ as a "very good phone" that will have more than enough features to sway people to upgrade.

The Verge kicked off its review by stating simply, "the ‌iPhone 11‌ is the phone most people who are upgrading to a new ‌iPhone‌ this year should get." The site particularly liked the ‌iPhone 11‌'s camera upgrade, including the ultra-wide lens and Night Mode. With the upgrades, The Verge said that the ‌iPhone 11‌ goes so far as to make photos taken on the ‌iPhone‌ X "look downright bad."

So, is it worth upgrading to the iPhone 11? If you’ve got an iPhone older than the XR and you’re looking to upgrade, I think the answer is yes. The camera is substantially improved, and you will get vastly better battery life than anything aside from a XR. That’s what most people care about, and Apple has really delivered here.

I’d only spend the extra money on the iPhone 11 Pro if you really care about the display. I don’t think you’re missing out on much by not having a telephoto camera lens, to be honest. I personally care quite a bit about displays, so I’m getting a Pro, but I think most people will be very happy with the iPhone 11.

Engadget discussed the display quality on the ‌iPhone 11‌, pointing out that its LCD display is the same one found in last year's ‌iPhone‌ XR. While this is a lower quality display compared to the OLED in the ‌iPhone 11‌ Pro and ‌iPhone 11 Pro Max‌, "in day-to-day use, the differences don't matter," according to the site.


In some ways, the iPhone 11 is subject to the same fundamental shortcomings as the XR: It has one less camera than Apple's more-premium models, and its screen isn't nearly as nice. To that, I say, "Big whoop."

The one thought that stuck in my head during my testing was that the gulf in functionality between this phone and the Pros has become surprisingly narrow. There are advantages to splurging on the Pros, but after getting a feel for what the iPhone 11 is capable of, those benefits won't always justify spending the extra $300. Like I said before, the iPhone 11 is the best new iPhone for most people, and it's unquestionably the one I would buy for myself.

Pakaku
A phone for just about everybody, if you don't factor in the price
Score: 15 Votes (Like | Disagree)

Just about everybody doesn’t have to mean you. It’s quite clear the vast majority are happy with large phones.
Score: 10 Votes (Like | Disagree)

Drogba11
Just wish it had an OLED, looks like another year with my X
Score: 10 Votes (Like | Disagree)
Read All Comments