Apple provided iPhone 11, 11 Pro, and 11 Pro Max review units to members of the media following its September 10 event, and today, those reviews were published, giving us some insight into the new devices.

Apple this afternoon highlighted several of the reviews, focusing on the positives of the iPhones, including the upgraded camera tech and the improved battery life. 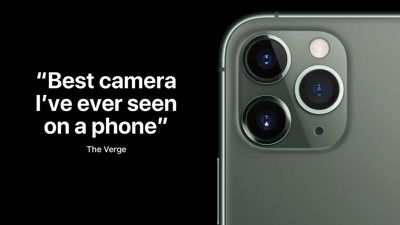 TechCrunch, for example, praised Night mode, calling the exposure and color "best in class" compared to other low-light cameras, and Refinery29 said it can double as a flash light.

"The best new feature here is Night mode, which pretty impressively brightens dark photos ... it's automatic in low-light settings. You can even use it as a flashlight. When you shine it at something dark, the screen will display it with more light than you can see with your own eye."

The Verge called the new devices the "most capable phones" ever made.

"[iPhone 11 Pro and iPhone 11 Pro Max] are some of the most well-balanced, most capable phones Apple -- or anyone -- has ever made. They have excellent battery life, processors that should keep them relevant for years to come, absolutely beautiful displays and a new camera system that generally outperforms every other phone, which should get even better with a promised software update later this fall."

Engadget praised the affordable $699 price of the ‌iPhone 11‌, CNBC said Apple's portrait mode is the best, and HardwareZone said the A13 bionic "wipes the floor" with the competition.

While Apple highlighted the most positive bits of each review, on the whole, most praised the new iPhone anyway. Some reviews, though, did see the updates as mostly iterative without a whole lot of innovative new features with the exception of the camera improvements.

Our full review roundups of the iPhone 11 and the iPhone 11 Pro go into more detail about what to expect from the new iPhones and are worth checking out for those who want to know more.

Baymowe335
I’m sick of hearing about “iterative” updates. They are not iterative for the target upgraders. An iPhone 6 or 7 iPhone to either the 11 or the Pro would be a large jump.

I don’t think Apple expects users with an XS to upgrade to the Pro.
Score: 19 Votes (Like | Disagree)

justperry
Of course they are better than last years...Duh
Score: 12 Votes (Like | Disagree)

I'd love one, but something is telling me NEXT YEAR will be the year more dramatic changes are going to be seen.
Perhaps many of the things that were rumored for this year, but never made it in time?

macduke
I feel like it's not getting enough coverage about how much sharper the camera is in normal lighting conditions. Everyone is talking about night mode.

Check out this screen grab from The Verge review on YouTube in 4K showing a crop from the iPhone 11 Pro and iPhone XS. Note the extra detail in the hair, the eyelashes, the teeth, the lines on the lips.

But the night mode isn't to be forgotten. It's certainly amazing. Just look at these crops between the iPhone 11 Pro and the Pixel 3. You lose details to noise on the Pixel 3, and some areas compared to the iPhone just look like a mushy, unsaturated mess. Note the clarity of the graffiti at the top of the building in the first shot, or the green bush/grass detail in the center of the frame along with the texture on the rock and twigs on the tree in the second shot, or the clarity of the fence without blowing out saturation on the windows in the final shot.

I regularly use my Sony a7R III mirrorless camera which has amazing resolution and dynamic range but I have to say that the iPhone is finally becoming a great camera. I won't feel too bad about leaving my kit at home when I'm just out at the park having fun with my kids and want to take a few shots. I know they'll look great.

Relentless Power
Usually the Verge is pretty cynical about Apple, especially when it comes to the iPhone, so it seems like they’re extending high praise for the new ‘tri-lens’ camera and improved battery life. I admit, I thought these phones would probably be underwhelming for 2019, but I think Apple made some really nice changes with the additional water resistance and lowlight/camera additions.
Score: 10 Votes (Like | Disagree)

Highly doubt it. Expect more disappointment from Apple aside from 3 or 4 new things. It’s Apple we’re talking about.

Wrong, it’s the industry we are talking about. There will be no major innovations coming out of any smartphone manufacturers short of foldable phones. You just need to learn to accept it.
Score: 10 Votes (Like | Disagree)
Read All Comments