Apple Arcade appears to be rolling out to a handful of users ahead of its planned September 19 release date, based on a few tweets and emails sent to MacRumors.

We've also received access on one of our devices, and it appears those who are able to use ‌Apple Arcade‌ at this time are running either iOS 13 or the latest iOS 13.1 beta. 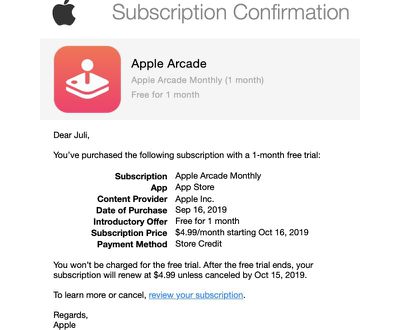 We were able to sign up for a complete ‌Apple Arcade‌ subscription, which comes with a one-month free trial. After that, ‌Apple Arcade‌ will be priced at $4.99 per month.

There appear to be right around 54 games available at launch, and we'll have a full list of titles coming soon. Games run the gamut from puzzle titles to action titles to RPGs and multiplayer games. Apple says new games will be added regularly.

Installing ‌Apple Arcade‌ games after subscribing is as simple as browsing the available game catalog, choosing a game, and tapping on the "Get" button.

Games can be downloaded and played fully offline, with no internet access required, and there appears to be no limit on the number of ‌Apple Arcade‌ games that can be installed at one time.

‌Apple Arcade‌ is set to launch in an official capacity this Thursday, and it's possible Apple will continue rolling out access ahead of that date.

Have questions about ‌Apple Arcade‌? Let us know in the comments and we'll try to answer.

Instead it cancelled the subscription completely, no longer allowing me to use it, and when I try to subscribe again, the free trial option is no longer available, instead asking me to pay the $4.99 to sign up.

Maybe, if only you had read the line directly below the cancel button that says cancelling a free trial will do exactly that, you’d have known that it would do that.
Score: 6 Votes (Like | Disagree)

Devyn89
I noticed this too, I was able to sign up about 5 minutes ago, I’m downloading a couple games right now. I’m on iPadOS 13.1 public beta 3. AAAHHHH this is awesome.
Score: 5 Votes (Like | Disagree)

Should I go tell people what to do in forums instead?
Score: 4 Votes (Like | Disagree)

Why is playing games an unreasonable thing to do? It’s fun.
Score: 4 Votes (Like | Disagree)

About 67% of Americans, or roughly 211 million people, play video games on at least one type of device, with more than half of those who game, playing on multiple platforms, according to a new study released by Electronic Entertainment Design and Research. I know your profile says you're from Europe, but I bet it's not so different there. :)

Take games for what they are - just a different entertainment platform in addition to a tv show, movie, or book. :) Just like in movies, some games can be a real thinker, while others are just guilty pleasure nonsense fun.
Score: 3 Votes (Like | Disagree)
Read All Comments