Update: On schedule, the HomePod has now launched in Japan and Taiwan. 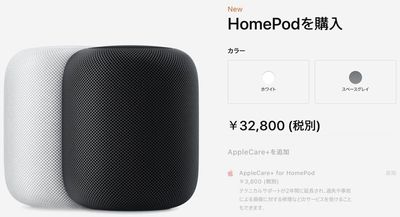 Apple announced plans to expand the ‌HomePod‌ to Japan and Taiwan earlier this summer, and added support for the new countries in the 12.4 software made available for the ‌HomePod‌ in late July.

Does anyone use this thing really?

Roughly 3-4 hours a day. Every day. For the past year and a half.

I've got one and honestly I don't use it much. If it had built-in Spotify/Bluetooth, or if Siri actually worked—it'd be useful.

Siri actually works. Maybe a trip to the genius bar is in order?
Score: 28 Votes (Like | Disagree)

Santabean2000
Why is this thing not available everywhere already? It's not like Siri actually works anyway...
Score: 26 Votes (Like | Disagree)

ipedro
This is certainly not a product Apple is giving up on. Expanding reach, frequent updates with new features, integration with Siri Shortcuts that continually give it new capabilities, an accumulating user base.

Apple isn’t giving up on HomePod anymore than they gave up on the AppleTV when it was a niche product. It was a foundation on which Apple is building on through software updates.

It’s still only a little over year old and has already received 3 major updates. If anything, they’re dedicated to it.

Eventually, the critics will end up in the same place as those who said the Apple Watch was a failure. Curiously, you never hear from those people again.
Score: 24 Votes (Like | Disagree)

Roughly 3-4 hours a day. Every day. For the past year and a half.

Siri actually works. Maybe a trip to the genius bar is in order?

Seconded. I have a stereo pair in one room and a single unit in a bedroom, which I used to stream music from Apple Music or from iOS and to query and control HomeKit accessories both within and outwith my home. Sounds great. Works great.
Score: 20 Votes (Like | Disagree)

calstanford
Does anyone use this thing really?
Score: 16 Votes (Like | Disagree)

ThatGuyInLa
To all those countries, my deepest apologies.
Score: 15 Votes (Like | Disagree)
Read All Comments