A security researcher named MG has developed a Lightning cable replacement that can give hackers a way to remotely access your computer, reports Motherboard.

The cables in question (dubbed O.MG Cables) are cables directly from Apple that have been opened up to allow for additional components to be implanted, but the modifications are undetectable and there's no way to distinguish the hacked cable from the original. 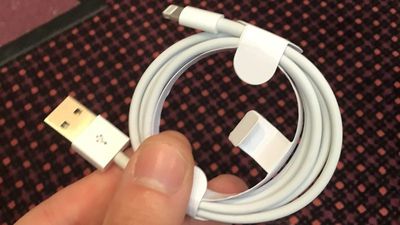 Image via Motherboard
When plugged into a target computer, the cable behaves as a typical cable does, connecting to and charging iOS devices, but it also lets hackers remotely connect to a machine to run commands. It comes equipped with scripts and commands that a hacker can run on a victim's machine, along with tools to "kill" the USB implant to hide evidence of its existence.

MG typed in the IP address of the fake cable on his own phone's browser, and was presented with a list of options, such as opening a terminal on my Mac. From here, a hacker can run all sorts of tools on the victim's computer.

"It's like being able to sit at the keyboard and mouse of the victim but without actually being there," MG said.

In a test with Motherboard, MG was able to connect his phone to a WiFi hotspot that the cable was emitting. He said he needed to be within 300 feet to access the target machine, but also said that the cable can be configured to act as a client for a nearby wireless network, potentially allowing for hacking from an unlimited distance.

"I'm currently seeing up to 300 feet with a smartphone when connecting directly," he said, when asked how close an attacker needs to be to take advantage of the cable once a victim has plugged it into their machine. A hacker could use a stronger antenna to reach further if necessary, "But the cable can be configured to act as a client to a nearby wireless network. And if that wireless network has an internet connection, the distance basically becomes unlimited."

MG imagines the cable could be swapped in for a target's legitimate cable or gifted to someone because it looks exactly like an Apple cable, complete with accurate packaging. Each of these cables were made by hand and are being sold by MG for $200, but he is teaming up with a company to produce them as a legitimate security tool.

It's not clear if there is any defense against this kind of hack, but it sounds like these cables are prohibitively expensive and limited in availability at the current time. Those concerned should buy cables directly from Apple without accepting free cables from anyone. Apple may also be developing a mitigation and has previously restricted other USB access techniques through USB Restricted Mode.

mr.steevo
Be wary of a guy in a trench coat handing out free Lightening Cables.
Score: 75 Votes (Like | Disagree)

"Those concerned should buy cables directly from Apple without accepting free cables from anyone."

People give out free cables?
Score: 49 Votes (Like | Disagree)

SecuritySteve
I think the scariest part of this is that it shows that should a supply chain be compromised, and secret components added to the manufacturing process, it would be virtually impossible to detect prior to normal use.

Good work though. It might lead to more 'do you trust this keyboard?' prompts though...
Score: 37 Votes (Like | Disagree)

ckurt25
This is why we can’t have nice things.
Score: 31 Votes (Like | Disagree)

Get a Sharpie and mark a soot on your cables. Problem solved.

Attacker has ability to embed a small computer and wireless transceiver in a tiny USB cable and covertly connect to it.
Attacker can't figure out how to use a Sharpie.
Score: 24 Votes (Like | Disagree)

That would be the opposite of what you want. You want a supplier that you know has strong supply chain security protections. Anker is a foreign-owned company which, for even mid-level security regulations, disqualifies it right there.

Plus, buying from Amazon is the absolute worst because they co-mingle inventory. Somebody could send tampered cables for sale via FBA, and they would send them to you as sold by Amazon or Anker. Buying from mail order allows for targeted attacks, even somebody swapping the package on your porch. The safest would be to walk right into a random Apple store and select a box off the shelf.
Score: 16 Votes (Like | Disagree)
Read All Comments