Update - Jul 11: Octopus Cards Limited has now confirmed that customers will be able to use their Octopus cards on their iPhone or Apple Watch for transit and retail payment with Apple Pay later this year. Original story below.

(Hong Kong,11 Jul 2019) Octopus Cards Limited is excited to announce that customers will be able to use their Octopus on their iPhone or Apple Watch for transit and retail payment with Apple Pay later this year. More details will be shared soon. @MacRumors @9to5mac @appleinsider pic.twitter.com/e2wurzcKgs — ST (@TWaIIk) July 11, 2019

iOS 13 may come with built-in support for Hong Kong's Octopus contactless payment system, if a few lines of code discovered on Apple's servers are any indication.

The discovery also tallies with specific references to Octopus on ‌Apple Pay‌ in the iOS 13 beta, according to the Japan-focused site.

Octopus is based on the same FeliCa NFC standard used for the Japanese Suica card, and is used by the vast majority of Hong Kong residents for making transit payments and retail transactions.

Originally launched in 1997 as a physical contactless card, the FeliCa-based version made the transition to electronic payment solution when the company unveiled Smart Octopus for Samsung Pay in December 2017.

The exclusive deal with Samsung left ‌Apple Pay‌ users without a way to take advantage Smart Octopus, despite it being technically compatible with ‌iPhone‌ 7 and later models, so today's find should make for good news for those hoping to digitize the popular transit and retail payment card, which should also support Apple's Express Transit mode.

iOS 13 for ‌iPhone‌ is expected to be released in the fall.

And what does this have to do with China?
Score: 10 Votes (Like | Disagree)

...Hong Kong is not China... especially in this case with regards to octopus...
Score: 5 Votes (Like | Disagree)

Pretty much just download the WeChat (you can’t find a person without WeChat on their phone). If you ever shop on Taobao, you will need Alipay anyway.

Most of these apps are preinstalled on phone anyway. There is no hunting for the app. After two or three tries, it will become second nature.

I also need to mention that, even if you go with cashless, you need carrying you wallet anyway. Highly likely you gonna walk in a store that does’t accept taps. Even with tap, there is hard limit on transactions ($100 in Canada).

With QR code, all I need is my phone. No wallet, no nothing

Your statement is correct in Mainland China. But Hong Kong is a special administrative region. Octopus card has been well established in HK for twenty years. All public transit and many local businesses accept Octopus card. There are more places accepting Octopus than QR code payment in HK. By having octopus in Apple Pay, I believe the market share of Apple Pay in HK will significantly increases.

There are several advantages of octopus card when comparing to AliPay or WeChat Pay. As octopus is an offline payment and utilities NFC, the speed is much faster to QR code payment. With credit card auto-recharge, many people don’t even need to recharge their octopus card manually.

Last but not least, it is about politics. Although AliPay and WeChat Pay HK are gaining market share in HK, but there are still a lot of HK people refuse to use Chinese mobile payment platform due to privacy concern and distrust to Mainland China.
Score: 4 Votes (Like | Disagree)

As a person living in Hong Kong, it will be a major convenience to me, and sorry I do not agree with your "unwise" comment. I'm being very polite here.
[doublepost=1561718868][/doublepost] 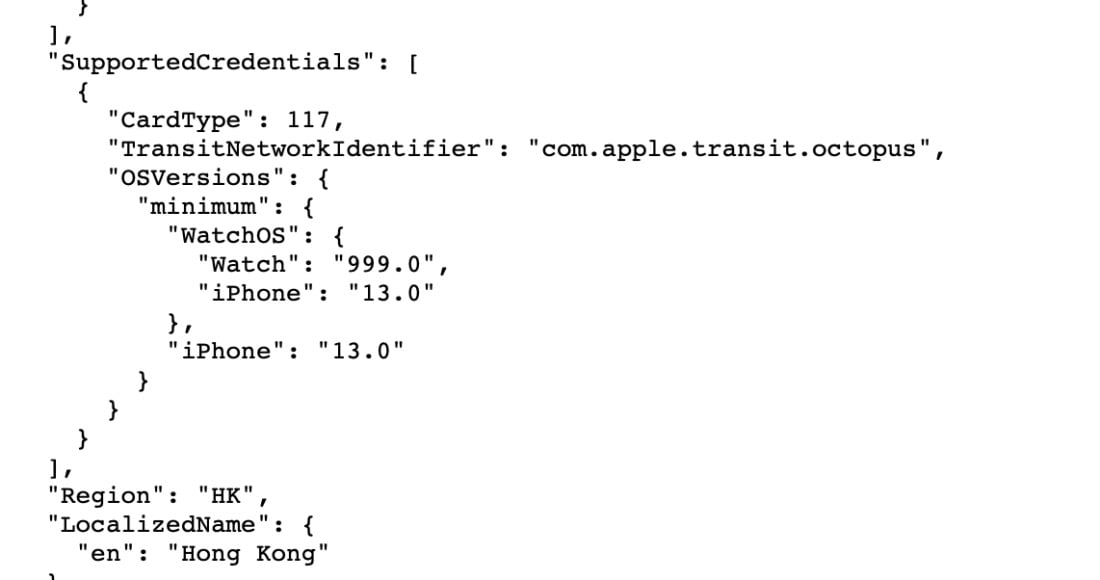 By the way, in the code, it says minimum WatchOS version is 999.0, does it mean that it will only support the iPhone but not Apple Watch?
Score: 4 Votes (Like | Disagree)

So in other words WeChat Pay and Alipay are just the CurrentC for Asia. You guys should be against this! QR codes? Direct access to bank account? It literally is CurrentC!

Sheesh Apple Pay wins in every way compared to this.


The major difference is that CurrentC was only for specific big brand name stores, which is exactly the places where QR code based payment method isn't needed. The QR code method is a lot more viable financially to smaller stores and temporary booths.
[doublepost=1562877798][/doublepost]

And the Bay Area has 7.75million people, it’s where Apple is from, and no sign of Clipper Card coming to iPhone! >:-(

But less than 1% of that 7.75 million people regularly use any of the public transit methods supported by Clipper Card. While in Hong Kong, that percentage is over 95%, at least.
Score: 2 Votes (Like | Disagree)

There are so many limitations on Octopus card, it does not compete with WeChat Pay and Alipay at all.

WeChat Pay and Alipay are connected to your bank account, so there is no need to charge money to the Octopus card. And there is limitation on how frequently you can recharging Octopus card.

WeChat and Alipay post payment right way from your bank account, where Octopus card need to wait for certain time for payment to be posted.

So in other words WeChat Pay and Alipay are just the CurrentC for Asia. You guys should be against this! QR codes? Direct access to bank account? It literally is CurrentC!

Sheesh Apple Pay wins in every way compared to this.
Score: 1 Votes (Like | Disagree)
Read All Comments