Apple has announced the opening of a new Design and Development Accelerator in Shanghai as part of an effort to support engineering talent and boost growth in China's iOS developer community. 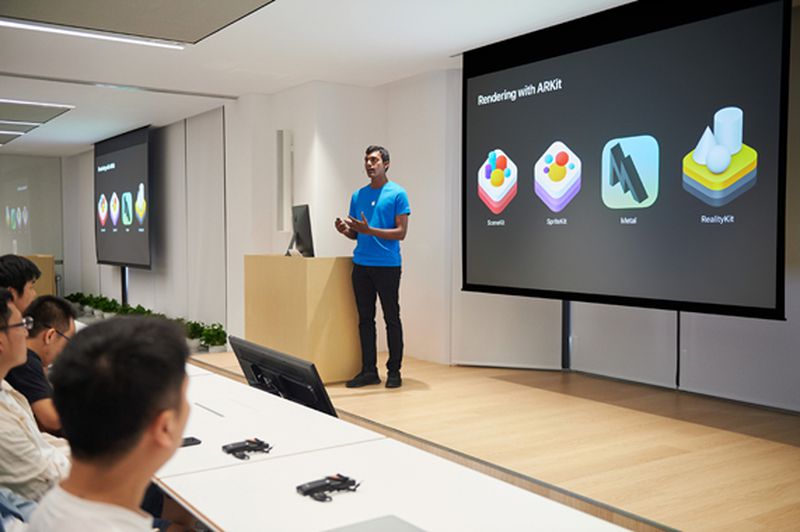 Located in Pudong District, the Accelerator is being launched to give Chinese developers a chance to work closely with Apple experts to enhance their app development skills, learn how to take advantage of the latest Apple software and hardware, and get tips on app marketing and distribution.

"Developers here in China are leading the world with some of the most popular apps on the App Store, and we are proud to be providing this additional support for them," said Enwei Xie, Apple’s head of developer relations, Greater China. "From education to health to entertainment, the innovation we see here is incredible and we can't wait to see what these talented developers will come up with next."

The first Accelerator program focused on how to implement Apple's augmented reality technologies, with an in-depth look at the latest updates to ARKit 3, AR Quick Look, Reality Composer, and RealityKit. According to Apple, the range of activities includes lectures, workshops, labs, guest speakers, train the trainers, and networking on a regular basis.

Apple says Greater China has over 2.5 million app developers, and since 2010, local developers have earned over 200 billion RMB through ‌App Store‌ sales, with over 30 percent of those earnings made in the past year alone.

Shanghai's Accelerator follows a similar scheme Apple launched in 2017 in Bangalore, India. To attend programs, attendees must be registered members of the Apple Development Program and have an Apple ID registered in the region.

Helping China win the technology competition. Remember. every time you purchase an Apple product you are helping China, not the US. Straight out "sell them the rope to hang you by".

Sure. Because no Americans make their living developing the OS, engineering the hardware, etc. And those American engineers who don’t exist don’t spend the paychecks they don’t receive in the US, thus keeping other Americans employed.

The only jobs that matter are jobs putting things together, right?
Score: 3 Votes (Like | Disagree)

I hope there’s program like that in America too!

Apart from a lucky and talented few there are not many that can live on App Store income in the USA, whereas Singapore is expensive in terms of cost of living, the neighboring countries are not.
Score: 2 Votes (Like | Disagree)

Solomani
And there must be 3 dozen Xiaomi and Huawei corporate spies (infiltrators) embedded within that Apple app design group in China. Makes their job of pilfering Apple's software IP and ideas so much easier.
Score: 2 Votes (Like | Disagree)

ronntaylor
The more, the merrier. Why this is looked at in a negative light is beyond me. Increasing iOS development in the most populous country on earth seems like a winning strategy. Similar to increasing iOS development in the 2nd most populous country on earth as mentioned in the story.
Score: 2 Votes (Like | Disagree)
Read All Comments

Tuesday April 7, 2020 10:06 am PDT by Juli Clover
Apple today released iOS and iPadOS 13.4.1, minor updates that come two weeks after the release of iOS and iPadOS 13.4, major updates that introduced iCloud Folder Sharing, a new Mail toolbar, trackpad support for the iPad, and more. The iOS and ‌iPadOS‌ 13.4.1 updates are available on all eligible devices over-the-air in the Settings app. To access the updates, go to Settings > General...
Read Full Article • 73 comments