Ookla, the company behind the popular Speedtest bandwidth measurement service, today released its 2019 Speedtest Mobile Performance Report, leveraging over 11.5 million speed tests from over 4 million unique devices to rank the network performance of the major U.S. carriers during the first half of 2019.

Overall, Ookla found that the mean mobile download speed rose to 33.88 Mbps during the first half of the year, up 24 percent compared to the same period in 2018. That improvement allowed the U.S. to rise from 43rd to 40th in the global rankings of mobile download performance. Mean upload speeds rose 13 percent to 9.75 Mbps, which actually resulted in a drop of 21 spots to 94th in the global rankings. 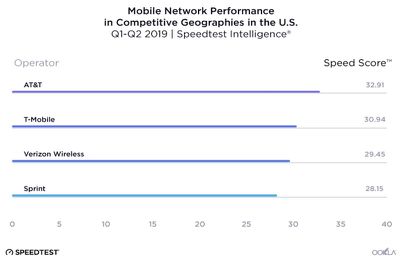 Looking at the four major U.S. carriers, AT&T came out on top in this year's survey with a Speed Score (a weighted rating of 90% download and 10% upload speeds) of 32.91, with T-Mobile, Verizon, and Sprint following behind. That marks a significant improvement for AT&T, which placed third in last year's survey.

Delivering LTE service over seven licensed frequency bands and increasing the amount of seeded devices capable of four and five carrier aggregation has been paying off for AT&T. Over the past year, AT&T has managed to leapfrog the competition to produce the fastest download speeds across the country.

AT&T’s addition of FirstNet spectrum meant a required maintenance visit to cell sites and the addition of brand new hardware at those locations. AT&T wisely used this opportunity to also upgrade the existing radio access infrastructure, including replacing the aging Alcatel-Lucent equipment with Nokia in some areas and adding the 2.3 GHz WCS spectrum for additional capacity. This strategy, combined with a slew of Category 15-20 LTE smartphones, meant a tremendous boost in coverage, speeds and overall capacity.

But beyond raw download and upload speeds, Ookla also looked at several other metrics including Acceptable Speed Ratio, which is the percent of samples from a given carrier that measured at least 5 Mbps. By this metric, Verizon maintained its spot atop the rankings from last year, with 87.3 percent of samples meeting the 5 Mbps standard in 2019. T-Mobile and AT&T were fairly close behind at 86.9 percent and 85.9 percent respectively, with Sprint trailing at 81.2 percent.

Looking ahead toward 5G technology that's just starting to roll out, Ookla has opted not to release performance data at this point due to the very limited geographies where it's available and lack of widespread device support for now, but the company has seen speeds in excess of 2 Gbps in some real-world consumer speed tests.

Ookla has plenty more data on its page dedicated to this year's study, including a state-by-state breakdown where you can see how the major carriers rank on a more localized basis.

Breaking Good
My take away from this is that there is nothing here that justifies paying more for one cellular carrier over another. Go with the least expensive carrier that has coverage in the places you frequent and periodically re-evaluate your choice to see if there are better options.
Score: 3 Votes (Like | Disagree)

dannyyankou
I’ll take consistency over top maximum speed. Obviously hyperbole, but if there was a network that only worked in Montana and Idaho but with the fastest speeds, it’s kinda useless.
Score: 3 Votes (Like | Disagree)

dlewis23
It still really depends on where you live as to who is the fastest no one carrier is consistent across the country.
[doublepost=1562678265][/doublepost]

I call complete garbage. AT&T is the worst in the area I use it. It speeds are consistently ridiculously low

Just because they are the worst in your area doesn't mean they are not fastest in others.
Score: 3 Votes (Like | Disagree)

MarkDeMoss
I'm on Verizon using their Beyond Unlimited Plan. It's a single phone plan so I pay $85. I'd switch to another carrier, but all four carriers cost the same for the same features (plus or minus $5).

If a get another line, then the carriers will give us a paltry $5-10 discount. It takes 3 lines before you start seeing $30-40 discounts per line. It's so stark that 3 lines is the same price as 2 lines on some carriers.

I recently drove from Connecticut to Tennessee and back. My friend has AT&T Unlimited. It's was good to have both carriers as we were in the mountains, some places I would get coverage and another place he had coverage. There was one point where we were on the Blue Ridge Mountain and if we would have had the same carrier we might have run out of gas.

I switched from having AT&T two years ago to Verizon and honestly I think it's a wash. I had AT&T for 18 years prior to the switch. I thought Verizon would be better in rural parts but that's not necessarily been the case for me. I guess I thought Verizon would be SO MUCH better than AT&T and so it's disappointed me. It's not worse, may be a bit better, but it's not so big that it'd make me loyal to Verizon.

What I like about Verizon and this is why I switched in June 2017 is because their iPhones are unlocked to all carriers. I remember trying to get a friend's Sprint iPhone unlocked by Sprint (which they say you can do), it was such a nightmare, we ended up giving up and just selling it.

I also like the free Apple Music on Verizon. The Hulu and Netflix offerings of other carriers wouldn't work for me as I prefer the top tier Hulu and Netflix plans. The free Amazon Prime on Sprint would be a nice feature though.
Score: 2 Votes (Like | Disagree)

M.PaulCezanne
I pay $80/mo for full T-Mobile One service for TWO lines ($40 per line). Verizon's equivalent plan costs at least TWICE as much, while ATT's is nearly twice. Network speeds are virtually identical. The choice is crystal clear for me.
Score: 1 Votes (Like | Disagree)

jamezr
Was a T-Mobile customer for years...best customer service of any carrier in my experiences. But their coverage fell off the planet in buildings or outside of big cities. Switched to verizon and love the coverage...no dropped calls and i can get data service in buildings and areas outside of big cities when hiking.
Score: 1 Votes (Like | Disagree)
Read All Comments

Sunday September 25, 2022 6:50 am PDT by Sami Fathi
Apple may decide to release its remaining products for 2022, which include updated iPad Pro, Mac mini, and 14-inch and 16-inch MacBook Pro models, through press releases on its website rather than a digital event, according to Bloomberg's Mark Gurman. In his latest Power On newsletter, Gurman said that Apple is currently "likely to release its remaining 2022 products via press releases,...
Read Full Article • 137 comments