There are no super exciting new changes in the second beta of iOS 13, but several features that were not functional in the first beta are now working. All of the changes we've found so far are below:

- SMB Server Connectivity - One of the new features in iOS 13 is an option in the Files app to connect to server using SMB. This feature wasn't working in the first beta, but is functional in beta 2, so iOS 13 users can do things like connect to a home NAS. 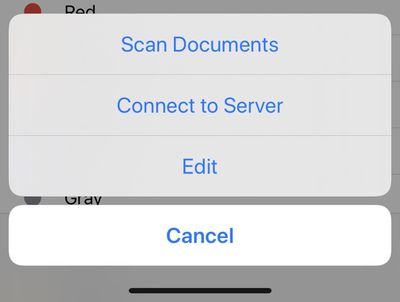 - Downtime - According to Apple's release notes, the Downtime feature in Screen Time now syncs to the Apple Watch.

- Safari Share Sheet - When sharing a webpage from the Safari Share Sheet, there are new options to share it as a PDF or a Web Archive. There's also an "Automatic" option that picks the most suitable format for each app or action.

- Notes Checklists - In iOS 13 beta 2, there's a new option to automatically move checked off items in a list to the bottom of the list. You can adjust this in settings or use the popup that comes up the first time you create a list after updating to beta 2.

- Maps Splash Screen - When opening up the Maps app for the first time there's a splash screen that lets you know all of the new features in the update.

- Portrait Mode Lighting Slider - The slider that allows you to adjust the intensity of Portrait Mode lighting options is now available.

- HomePod and Apple TV Features - When opening up the Home app in beta 2, there's a new splash screen that lets you know about multi-user recognition on ‌HomePod‌ and profiles on ‌Apple TV‌. You'll be instructed to set up Hey Siri if it's not activated already, and prompted to add your profile to ‌Apple TV‌.

Voice Control - When the Voice Control Accessibility feature is turned on, there's a blue microphone icon at the top of the device to indicate that the iOS device is in Voice Control mode.

There are a number of other known issues that developers should be aware of before installing the beta, all of which are available through the release notes provided with the software on the developer website.

We've heard reports that iOS 13 beta 2 and iPadOS beta 2 feel more stable than the original betas, but there are a number of remaining bugs and Apple still warns against installing the software on a main device.

AllergyDoc
Sounds like some excellent upgrades. Can't wait for the public beta to come out.
Score: 10 Votes (Like | Disagree)

coolfactor
Hey @Apple, I appreciate that you're trying to be polite here, but you're going against your own user interface guidelines! :mad:

Until there's downloadable maps, there's no way I can replace Google Maps and thus still will use Google maps 99% of the time.

Do you travel outside of signal coverage areas frequently? I do monthly now, and I was surprised how poorly Apple Maps works when you don't have a cell signal. Even my gf's Android phone from years ago did GPS far better than Apple Maps does.

JohnApples
MacRumors editors: please use a Tim Cook version of this Memoji whenever you write an article regarding “Apple quietly adds/removes x product/feature.”

sully54
Love that enhancements made to checklists in notes.

I would still like to see some sort of integration between reminders and calendar. There no reason why a reminder with a date alert shouldn’t show up in the calendar.

A good UX practice is to write in language that the user uses daily and never assume that they understand the language of business and what an acronym might mean.

What is an NAS?