Apple last week unveiled Project Catalyst, an initiative designed to allow developers to port their iPad apps to the Mac.

At the time, Apple named several partners, including Twitter, and today, Twitter provided more detail on its upcoming Mac app. 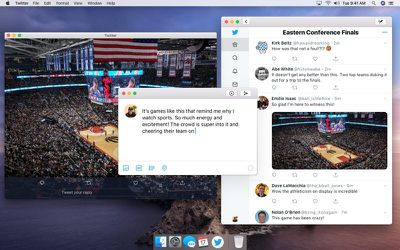 Twitter says that it will leverage its existing iOS codebase to bring Twitter to the Mac, but will add native Mac features on top of its existing ‌iPad‌ experience to make the app better suited for the Mac.

We are excited that Project Catalyst will enable us to bring Twitter back to the Mac by leveraging our existing iOS codebase. We'll also be able to add native Mac features on top of our existing iPad experience, while keeping our maintenance efficient as we continue to improve this shared codebase in the years to come.

The prior Twitter for Mac app never received much attention for Twitter. In 2015, the company said that it would refocus its efforts on building new features into the Mac app, but even after new features were added, the app didn't catch on and earned largely negative reviews in the App Store.

According to Twitter, the prior version of the Mac app was discontinued because it was not sustainable to maintain two separate codebases. Twitter wanted to focus on web and mobile instead of Mac, but with the new Twitter for Mac able to use the existing iOS codebase, there's less work to be done to make a Mac app available.

The new Twitter for Mac app will use our existing iOS codebase, rather than being built from a separate codebase, following the same successful strategy we've used with Web to expand our supported clients. By supporting key Mac-specific behaviors on top of our iOS code, we will be able to maintain feature parity across our iOS and Mac apps with relatively low long term maintenance costs.

zorinlynx
It still blows my mind that a company as big as Twitter couldn't keep their Mac app up-to-date without Catalyst as a crutch, when single developers can keep (far superior!) apps like Tweetbot, Twitterific and so on updated without a problem.

The current Twitter app is the result of Twitter acquiring Tweetie, another third party app from about a decade ago. They took a fairly streamlined and fast-performing app and turned it into the bloated mess that it is today.

So they'd just be repeating that if they did that. Leave Tweetbot alone. It's already been crippled enough by the API changes.
Score: 30 Votes (Like | Disagree)

What’s the timeframe on releasing this?

ARM Macs are coming people. This is the first step in enticing developers to get ARM-based Apps onto x86 machines, so why not vice versa?

They just released a $6000 professional Mac using high end Intel Xeon CPUs, and have forked iOS for the iPad as "iPadOS" to show they're going to take the iPad in a different direction.

At this point I doubt ARM Macs are coming, and Apple is just going to reposition the iPad to be a more capable laptop substitue for low-end users, and keep Intel Macs around for developers, power users and pros.
Score: 18 Votes (Like | Disagree)

definitely. There's no need for an app on either iOS or Mac or PC for something as rudimentary as Twitter blogging.
Website is fine. I guess developers like apps cuz they let them track the heck out of you

Any half decent app performs miles better than a website. And eats less battery.
Score: 15 Votes (Like | Disagree)

ARM Macs are coming people. This is the first step in enticing developers to get ARM-based Apps onto x86 machines, so why not vice versa?

I don't know why people keep assuming Marzipan has anything at all to do with CPU architectures.

UIKit has always run on x86 (the iOS Simulator does precisely that), nor is there a reason to assume AppKit wouldn't run on ARM.
Score: 13 Votes (Like | Disagree)

Cesspool of hate and banality.

Traitor to developers who built the early innovations in the early years.

Had a garbage app on the Mac. Then abandoned the platform after years of disinterest.

And now we are now supposed to welcome them back after they got a free ride from Apple.