Apple Highlights Stories of Two of Over 5,000 Developers Attending WWDC 2019

Apple's annual Worldwide Developers Conference kicks off next week at the San Jose Convention Center, and ahead of the festivities, Apple has shared a press release that highlights two of the over 5,000 people who will be attending this year. 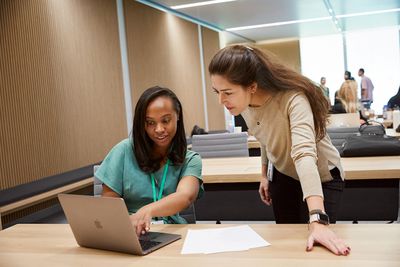 Erika Hairston, left, at Apple Entrepreneur Camp
The first is Erika Hairston, a 23-year-old Yale grad working in San Francisco who recently launched her first app named Zimela to promote diversity in tech. The second is David Niemeijer, a 50-year-old from Amsterdam who founded AssistiveWare, a company that designs communication aids for people with disabilities.

Hairston designed Zimela to help underrepresented groups enter tech by establishing mentorships and making users aware of career placement opportunities, like internships, according to Apple. She also recently completed the Apple Entrepreneur Camp for app-driven businesses that are owned or led by women.

Niemeijer designed a virtual keyboard that could be controlled using a mouse alternative that eventually became the program KeyStrokes. In 2001, a KeyStrokes user emailed Apple's late co-founder Steve Jobs to ask if KeyStrokes could be integrated into macOS, kicking off a nearly two-decade relationship with Apple.

David Niemeijer
Apple is set to host WWDC 2019's opening keynote on Monday at 10:00 a.m. Pacific Time, where it is widely expected to unveil iOS 13, macOS 10.15, watchOS 6, tvOS 13, and more. MacRumors will have full coverage of the event as it unfolds.
Related Forum: Apple, Inc and Tech Industry
4 comments

Why can’t I understand the title of this article. I’ve read it 20 times and still don’t get it.

It’s poorly phrased. Apple will have 5 thousand attendees, and has interviewed two of them for a story. That’s all.
Score: 1 Votes (Like | Disagree)
Read All Comments