Apple has faced increasing scrutiny as of late over the way it runs its App Store, ranging from Spotify's anticompetitive complaint in Europe to a class action lawsuit accusing Apple of operating an App Store monopoly in the United States, which the Supreme Court recently allowed to proceed. 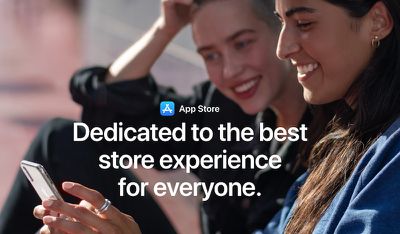 Apple has now responded with a new page on the ‌App Store‌ section of its website titled Principles and Practices, noting that the ‌App Store‌ was created with two goals: to be "a safe and trusted place for customers to discover and download apps" and "a great business opportunity for all developers."

To achieve the first goal, Apple says it "takes responsibility" for "ensuring that apps are held to a high standard for privacy, security, and content" in accordance with its publicly accessible App Store Review Guidelines:

We believe that what's in our store says a lot about who we are. We strongly support all points of view being represented on the App Store. But we also take steps to make sure apps are respectful to users with differing opinions, and reject apps for any content or behavior that we believe is over the line — especially when it puts children at risk. For example, we strictly prohibit any app that features pornographic material, discriminatory references, torture and abuse, or anything else in exceptionally poor taste.

Apple says an average of 100,000 apps are reviewed per week, most within 24 hours, by a combination of "hundreds of human experts" and "automated systems." Apple says 60 percent of submissions are approved, with 40 percent rejected, mostly commonly due to minor bugs followed by privacy concerns.

All developers have the opportunity to have a rejection reviewed, with Apple making some 1,000 calls a week to developers to help them resolve any issues.

As for the second goal, Apple says the ‌App Store‌ "welcomes competition":

We believe competition makes everything better and results in the best apps for our customers.

We also care about quality over quantity, and trust over transactions. That’s why, even though other stores have more users and more app downloads, the App Store earns more money for developers. Our users trust Apple — and that trust is critical to how we operate a fair, competitive store for developer app distribution.

Apple includes many examples of third-party apps that compete with its own apps, such as Spotify versus Apple Music and Google Maps versus Apple Maps.

Apple notes that it supports developers by providing a robust set of tools and SDKs, free marketing opportunities such as the opportunity to be featured in the Today tab on the ‌App Store‌, programs such as the Apple Developer Academy, and free educational materials such as Everyone Can Code.

In a new podcast interview with Bloomberg's Mark Gurman, Apple's former senior director of the ‌App Store‌ review team Phillip Shoemaker raised concerns about potential conflict between Apple and its competitors on the ‌App Store‌.

"There is now a conflict as Apple goes into these spaces that are ripe with competition," he said. "I'm really worried about the competition."

Tovenaar
Every once in a while I think this store really is becoming a monopoly, then I go to help my wife with her Samsung and get hit with a big fat reality check. It's really incredible what apple have done with the app store. The fact that we rarely have to worry about the quality of apps on there is incredible.

I sincerely hope Apple don't have to dismantle their app store. I don't think that would be a win for anyone, even those app developers who are so eager to kill the golden goose.
Score: 61 Votes (Like | Disagree)

Rogifan
Nowhere on this website does it say why certain things are subject to commission and why others aren’t, or why IAP has to use Apple’s payment system.

How come I can pay for an Uber ride inside of the Uber app and Apple gets nothing but if I want to buy a Kindle book it’s impossible to do so inside the Amazon app (because Amazon rightfully doesn’t want to give a cut to Apple)?

How come IAP only allows Apple’s payment method? Why can’t Spotify or others use their own payment system in-app?

If the explanation to these questions are either it’s a fee/tax paid to access a large customer base or it covers all the costs of maintaining the App Store, app review, software tools, promotion etc. then my answer would once again be why does this apply to only certain things, digital things (and in some cases things where Apple competes directly). Why doesn’t it apply to everything? Saying Apple deserves 30% of a Kindle book sale but not an Uber ride is an arbitrary distinction that makes little sense. Without iPhone/iOS Uber probably wouldn’t exist. One certainly can’t say that about Kindle books.

Once again Apple is ignoring the elephant in the room.
Score: 26 Votes (Like | Disagree)

If the platform is eventually opened up to Developer ID signed apps, nobody forces you to download them. Continue to use the App Store for the reasons you stated.

But guess what? 30% isn't measly. It's a lot. And a large amount of, not just a few, app developers are saying this.

Please. In the old days of packaged software sold in stores the developer would be lucky to get 30%. The other 70% went to retail markup at the store, the distributor and publisher of your software.
Score: 18 Votes (Like | Disagree)

I would too if I got a 30% cut off everything my "competition" sold through my distribution monopoly.

Please feel free to set up and maintain an end to end worldwide distribution model in over 100 languages and 100 countries, for both hardware and software - then we can talk about your 30%
Score: 18 Votes (Like | Disagree)

shanson27
Our store, our rules. Thumbs up
Score: 17 Votes (Like | Disagree)

If you want your app in the store then you pay the measly 30%. The problem is not the 30% fee, but instead the fact that no one can sell an app that costs more than 99 cents with a few exceptions. I say no thanks as I want my apps vetted for nefarious activity, incompatibility and other issues. Apple created the App Store concept and every developer signed up for it because it gave them exposure. They also new going in what the rules were. The only difference is a few app developers don't like the rules they agreed to.

Many app developers invested in time and equipment after signing up for the rules only to find them drastically changed a few months later. The goalposts change every few months with no warning. Apple are judge and jury. An app they love one month might be tagged for removal a year later. If you've invested in an app and that happens then it is game over.
Score: 15 Votes (Like | Disagree)
Read All Comments