Apple has begun promoting the opening of its second retail store in Taiwan. Located right outside Taipei's Xinyi A13 shopping mall on a tree-lined plaza, the standalone construction had promotional graphics installed on its temporary hoarding overnight. 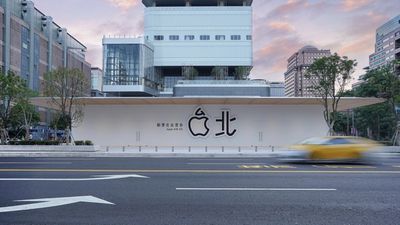 The logo on display is a play on the word "Taipei" in Mandarin, with the Apple logo inserted into the first character. The slogan on the facade says "Creativity starts here, Apple Xinyi A13."

From the outside, the building appears to be a single-story design, but likely conceals interior staircases leading down to an underground floor, with a thin carbon fiber roof held up by two stone pillars and a curved floor-to-ceiling glass facade, which would give it an affinity with Apple's existing store in Chicago, Illinois.

The adjacent Xinyi A13 shopping mall is still being constructed by the Far Eastern Group but is expected to open in September, so there's a chance the new Apple store will open to the public around the same time.

The new store is within 15 minutes' walking distance of Apple's first Taiwan store at Taipei 101 shopping mall in the Xinyi district, which opened in July 2017. Apple has reportedly confirmed that the opening of the new store won't affect the operation of Apple Taipei 101.

joueboy
I speak Mandarin the slogan actually says "Come in spend all your money to us". :D
Score: 12 Votes (Like | Disagree)

There is no such language as Taiwanese. It is a play on the Chinese charactors of "台北" (Taipei in Chinese).
Score: 8 Votes (Like | Disagree)

Taiwan is not part of China, and the official languages are, I believe, Formosan as well as English. Why would they mess around with Chinese characters? This doesn't add up. Did Apple cave in to Beijing?

Sorry, you are making inaccurate statements. Please read through this thread or do some research before making statements like this. To help you out:

* It's a political topic: is Taiwan part of China? The full name for Taiwan (democratic country) is "Republic of China" and the full name for Mainland China (communist country) is People's Republic of China. You figure what that means to you. Some people in Taiwan prefer to be independent from China. Some people in Taiwan consider themselves as the legit China. Again, it's a political topic that can cause some arguments. A good Thanksgiving conversation. :-)
* Formosa is the name of the island called by the Portuguese back in 1532.

Again, please check your fact before sharing your perceptions (which can be inaccurate). Hope that this helps. Thanks.
[doublepost=1558727772][/doublepost]

As a Taiwanese American guy, I definitely know that my biological mother speaks Taiwanese and Mandarin separately. Mandarin is used mostly by the Taiwanese folks who are derived from the Chinese invaders whereas Taiwanese is used by the native Taiwanese people who were not part of the descendants from the Nationalist Army.

It's fascinating to see how outsiders attempt to interpret a situation which requires a firm understanding of a 20th century Taiwanese history/political situation, then fabricate or surmise some type of scenario without the prerequisite research.

To add on what you said: Mandarin is considered as the national speaking language in China (both Mainland China and Taiwan). Taiwanese is spoken as one of a more popular local dialects in Taiwan. There are native Taiwanese (i.e. aboriginal folks) and they have their own dialects. Just like native American in US. The dialects in Taiwan became richer after the Nationalist Army moved to Taiwan. And echoing what you are saying: yeah, speaking with facts is important today. :-) Still, a good conversation to bridge the disconnect is a good thing. Hope that this help!
Score: 4 Votes (Like | Disagree)

Well just to nit pick, ( I know it is confusing )

Mandarin is the Spoken Languages in Mainland and Taiwan ( Mostly, there are other dialect ) . The Characters shown is Chinese. There is no such thing as Mandarin in Written. Only Chinese in Writing. So it should be ( play on the word "Taipei" in Chinese. )

Hopefully Taiwan and Japan have a few more Apple Stores planned, both region have a high iPhone usage with low Store count. ( Especially in Japan )
Score: 4 Votes (Like | Disagree)

There is no such language as Taiwanese. It is a play on the Chinese charactors of "台北" (Taipei in Chinese).

I think you boys mean Chicago, Illinois. Might want to fix that.