Apple today told The Canadian Press that it is aiming to bring ECG functionality to Apple Watch Series 4 devices in Canada "as quickly as possible."

The news comes after Health Canada this month approved the ECG app and irregular heart rhythm notifications on the ‌Apple Watch‌ Series 4, clearing the way for the features to be released in the country. 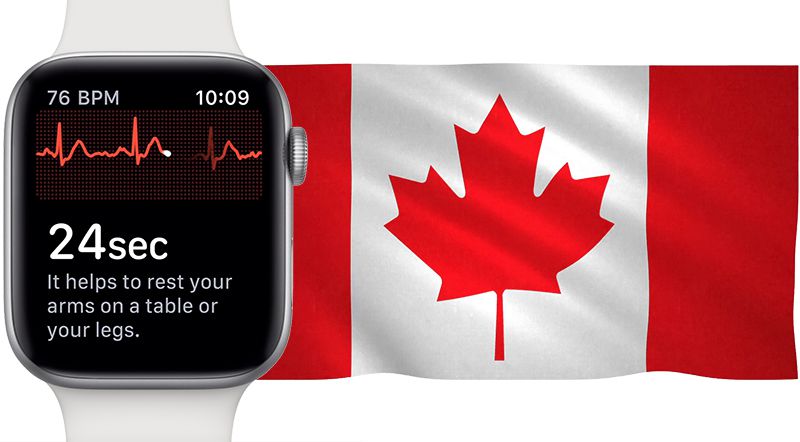 Health Canada classified the ‌Apple Watch‌ Series 4 as a Class II medical device, which places it in the "low-to-medium risk" category alongside other products like contact lenses.

The ECG app is designed to allow ‌Apple Watch‌ Series 4 readers to place a finger on the Digital Crown to get a single-lead ECG reading, which can detect atrial fibrillation, a condition that can be indicative of major health problems. Irregular heart rhythm notifications are a separate feature, meant to let users know if an unusual heart rhythm is detected so medical attention can be sought.

Apple did not provide specific timing on when we can expect ECG and irregular heart rate notifications to be available in Canada, but it could perhaps come in the watchOS 5.3 update, which is being beta tested right now, or it could be incorporated into watchOS 6, which will be announced at the Worldwide Developers Conference on June 3.

nitramluap
I just wish they'd hurry up and approve it in Australia... now that it has CE certification it should be automatically accepted and not require additional TGA approval. The cynic in me thinks that the TGA will insist on special approval so they can take a chunk of Apple's cash, when it's absolutely unnecessary.
Score: 10 Votes (Like | Disagree)

martyjmclean
I get Apple has to be certified by different countries' health regulators... but with their money and influence you'd have thought they would at least have Canada, the UK, Australia and New Zealand approved before launch.
Score: 9 Votes (Like | Disagree)

I don’t know why Canada, the UK, Australia and New Zealand should get special treatment. They aren’t even Apple’s largest market. Besides, it looks like they were tweaking the software right until the launch.i would much rather have a staggered release than no release for another year for a feature like this.

Because our regulatory, political and institutional systems are most similar. You know, the Anglosphere.
Score: 9 Votes (Like | Disagree)

Because the UK has a National Health service it won't approve any nonsense a watch says with out a Doctors approval. The watch is a dumb toy

And Australia, NZ and CA don't have a national health service? Sorry, I must've been paying thousands of dollars f[SIZE=3]or my GP + hospital visits without realising.[/SIZE]
Score: 6 Votes (Like | Disagree)

I pre-ordered series 4 Watch at launch due to the ECG features announced during the keynote. I rushed to the hospital last year twice due to chest pain. Both times the hospital didn't find anything but I was expecting that if there is anything the Watch will be able to detect. However, the ECG feature wasn't released at launch but it was expected that it will be with a software update soon so I didn't return the watch in 30 day period. Now after 9 months, ECG is still not available in Australia. This is false marketing by Apple and if Apple didn't work on regulatory approvals for launching this feature, they shouldn't have used this as a marketing point in the keynote for series-4.

I'm not sure what the marketing message was in Australia, but to be fair Apple did say at the keynote, ECG was available to US customers only. They didn't specify a time frame, but that other countries would follow.
Score: 6 Votes (Like | Disagree)

amssullivan28
As for Australia, nothing still on the Australian Register of Therapeutic Goods (ARTG) yet (part of the TGA, our medical devices regulator).

Guessing we’ll still be months away from the ECG functionality coming to Australia.

Have of course submitted feedback to Apple regarding this.

Tuesday March 31, 2020 10:22 am PDT by Juli Clover
Apple has acquired weather app Dark Sky, Dark Sky's developers announced today. Dark Sky is one of the most popular weather apps on the App Store, known for its accuracy and storm warnings. Our goal has always been to provide the world with the best weather information possible, to help as many people as we can stay dry and safe, and to do so in a way that respects your privacy. There is no ...
Read Full Article • 179 comments