Health Canada has cleared the ECG app and irregular heart rhythm notifications on the Apple Watch Series 4, suggesting that both features will make their much-anticipated debut in Canada in the near future. 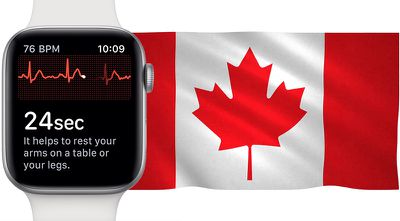 As spotted by the blog iPhone in Canada and confirmed by MacRumors, Health Canada issued active licenses for both features on May 16. The regulatory agency classifies the Apple Watch Series 4 as a Class II medical device, placing it in a "low-to-medium risk" category alongside the likes of contact lenses.

To view the licenses, navigate to the Health Canada search page and search for Apple based on company name.

With clearance from Health Canada, Apple could expand the ECG app to Canada in either watchOS 5.3 or watchOS 6, the latter of which should be unveiled at Apple's annual Worldwide Developers Conference next month.

Apple Watch Series 4 users can generate an ECG waveform in just 30 seconds by placing their finger on the Digital Crown.

Electrodes built into the Digital Crown and the back crystal work together with the ECG app to read your heart's electrical signals. Simply touch the Digital Crown to generate an ECG waveform in just 30 seconds. The ECG app can indicate whether your heart rhythm shows signs of atrial fibrillation — a serious form of irregular heart rhythm — or sinus rhythm, which means your heart is beating in a normal pattern.

Apple has yet to mention the ECG functionality on the Apple Watch health and fitness page on its Canadian website.

Health Canada indicated several times via twitter replies, and as recently as in March 2019, that it had not received an application from Apple. So unless that's a lie, who knows.

Not necessarily a lie at all, but as in most bureaucracies, sometimes the left hand doesn’t know what the right hand is doing. The PR folks who are hired to manage the Twitter account are unlikely to be aware of confidential regulatory filings, I would think.

At some point in the decades to come, maybe people will stop believing everything they read on the Internet :eek: But probably not. As long as it confirms their own opinion, many are eager to believe anything they read. If it’s the truth—but they don’t like it—it’s “fake news”.
Score: 6 Votes (Like | Disagree)

bchery21
Oh boy, the wait is almost over Canada!
Score: 4 Votes (Like | Disagree)

IIGS User
I'm 46 and pending surgery for a major heart condition. This is one of the reasons I decided to spring for the 4 when I did. The heart rate monitor, EKG, and fall detection were major selling points for me. I mean, I love the tech (Apple pay, using the watch for texts, the info you can get from the on screen complications, etc) but this was what put me over the edge.

It's not the same as a doctor visit, but a 1 lead EKG every day is still more monitoring than my condition would get short of being held in a hospital environment. And if I go down, I know someone is coming as it reports my location) to my wife, and a friend. I use the app to list my medical condition and medications (my heart is half of it, my liver is the other). These were big selling points.

Sometimes I get tachycardia, and usually it passes. It's nice to be able to check and inform my cardiologist of what happened along with a current BP reading. This way, I know I'm not gonna plotz before I get surgery.
Score: 3 Votes (Like | Disagree)

Sometimes I get tachycardia, and usually it passes. It's nice to be able to check and inform my cardiologist of what happened along with a current BP reading. This way, I know I'm not gonna plotz before I get surgery.

Plus you can export a PDF of your ECG reading to show your doctor. I know it's nowhere near as good as the readouts from a doctor's office but it's a heck of a lot better than having nothing but your verbal description of how you felt.
Score: 2 Votes (Like | Disagree)
Read All Comments