Monday May 13, 2019 5:30 pm PDT by Juli Clover
At the TRANSACT Conference in Las Vegas back in early May, Apple VP of Apple Pay Jennifer Bailey detailed some new ‌Apple Pay‌ features that Apple will be rolling out in the future.

As noted by Scott Harkey and Steve Moser on Twitter, Bailey outlined support for new NFC stickers or tags that will trigger ‌Apple Pay‌ for a payment without needing to have an app installed. 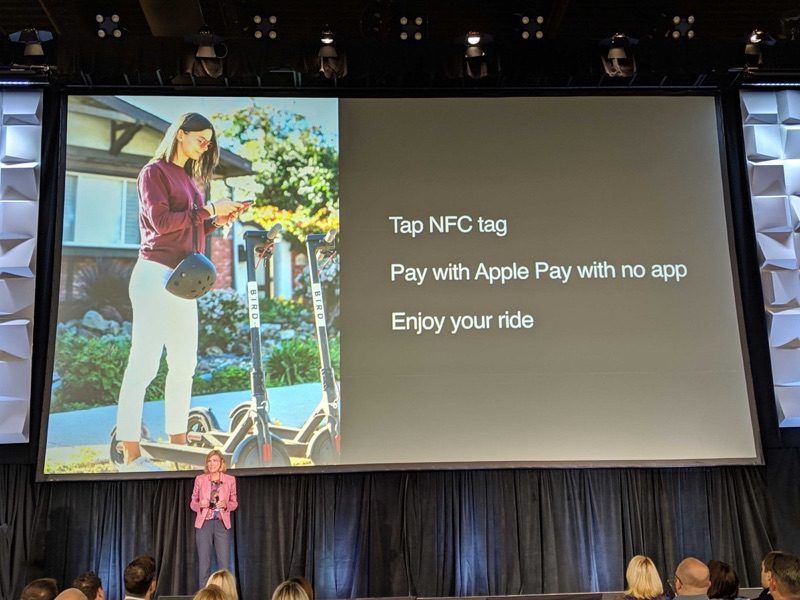 When you tap these stickers, you will be able to make an ‌Apple Pay‌ payment quickly and easily. Apple is partnering with Bird (a scooter company), Bonobos (a clothing store) and PayByPhone parking meters for the rollout of the service.

With the latter service, you can pay a parking meter with ‌Apple Pay‌ and then add more time to your meter from anywhere so your parking doesn't expire.

Apple is also planning on an instant enrollment feature for loyalty cards in the Wallet app in the near future. Dairy Queen, Panera Bread, Yogurtland, Jimmy John's, Dave & Busters, and Caribou Coffee are all planning to launch services later this year that will use NFC tags allowing customers to sign up for loyalty cards.

Apple announced support for NFC stickers/tags that trigger ‌Apple Pay‌ for payment without having an app installed. Imagine tapping your phone on a scooter or a parking-meter and paying for it without signing up or downloading an app first. #ApplePay https://t.co/owgOsH3N7L pic.twitter.com/jpxUf7H6v6


The new ‌Apple Pay‌ features use NFC features that Apple first began allowing access to in iOS 11. We may hear more about these new features at WWDC, set to kick off on June 3.

farewelwilliams
How about opening up NFC so that I can unlock my house/car by waving my iPhone on the door?
Rating: 22 Votes

LiveM
I moved banks for Apple Pay. My old bank doesn't get so much as an ounce of flesh now.
Rating: 8 Votes

oennich
This is really cool and would be great if small vendors (e.g. farmer's market vendors) could just have an NFC tag in the future instead of having a whole POS + terminal/square setup.
Rating: 7 Votes

How about opening up NFC so that I can unlock my house/car by waving my iPhone on the door?

You mean watch, right? Not sure I would want to be bothered getting my phone out just for that.
Rating: 6 Votes

Jodeo
How about NFC pet chips so that when you find a stray (or someone finds your lost fur baby), a phone's wave can provide an ID.
Rating: 5 Votes

What's in it for Apple?

You mean watch, right? Not sure I would want to be bothered getting my phone out just for that.

niji
this is game breaking.
this, and expanded support for Express Card apps/situations.
both put apple and the iPhone in an amazing trajectory for much needed retail level pull for iPhone use, and, secure entry/ID situations.
Rating: 5 Votes

why not scan QR codes, like wechat and other Chinese payment solutions have been offering for years? Seems like the same functionality. That would be cross platform as well (and I've just answered my own question lol)


Clumsy, slow, waste of time. Nobody wants to have to open the camera app to do these things.

NFC is cross platform. Android could just as easily implement this too.
Rating: 4 Votes

MisterSavage
Let me say yessssssss to more loyalty cards in my Apple Wallet. I love using my watch to get my loyalty card scanned at 7-11 and then paying with Apple Pay. So convenient and fast!
Rating: 2 Votes

How about NFC pet chips so that when you find a stray (or someone finds your lost fur baby), a phone's wave can provide an ID.


I never thought about this but it is an awesome idea!
Rating: 2 Votes