Apple CEO Tim Cook: 'I Don't Think a Four-Year Degree is Necessary to Be Proficient at Coding'

Earlier this week, Apple CEO Tim Cook visited an Apple Store in Orlando, Florida to meet with 16-year-old Liam Rosenfeld, one of 350 scholarship winners who will be attending Apple's annual Worldwide Developers Conference next month. 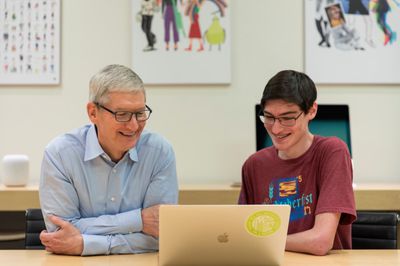 Apple CEO ‌Tim Cook‌, left, and WWDC 2019 scholar Liam Rosenfeld via TechCrunch
Echoing comments he shared with the Orlando Sentinel, Cook told TechCrunch's Matthew Panzarino that it is "pretty impressive" what Rosenfeld is accomplishing with code at such a young age, serving as a perfect example of why he believes coding education should begin in the early grades of school.

"I don't think a four year degree is necessary to be proficient at coding" says Cook. "I think that's an old, traditional view. What we found out is that if we can get coding in in the early grades and have a progression of difficulty over the tenure of somebody's high school years, by the time you graduate kids like Liam, as an example of this, they're already writing apps that could be put on the App Store."

Cook made similar comments during an American Workforce Policy Advisory Board meeting at the White House earlier this year.

While in Florida, Cook attended a conference that saw SAP and Apple announce an expanded partnership focused on new enterprise apps taking advantage of technologies like machine learning and augmented reality.

Despite all of the technological advancements in recent years, Cook told Panzarino that many businesses have not "changed a whole lot" and are "still using very old technology." With more solutions like those from SAP and Apple, and tech-savvy employees of the future like Rosenfeld, that could change.

The full interview can be read on TechCrunch with an Extra Crunch subscription or in the Apple News app with an ‌Apple News‌+ subscription.

Now, if you ever want to be more than a developer, a 4 year degree would likely come in handy.
Score: 66 Votes (Like | Disagree)

smaffei
Of course he doesn't. That's because Tim wants a cheaper labor pool. And, if the requirement is changed from a 4 year degree, the employers can eventually pay less.

That 4 years of Computer Science gave me the proper foundation to design / implement software (not just code).
Score: 54 Votes (Like | Disagree)

Stella
In a 4 year degree course, you learn more about software development than just cranking out code.
Score: 38 Votes (Like | Disagree)

So Tim is saying that I wasted four years of my life going to college?!?

What does Tim Apple know about coding? He's a supply chain expert.
Score: 36 Votes (Like | Disagree)

joueboy
One day these programmers will be like factory workers with the same salary. This is exactly what Tim and the rest of the tech industry are trying to do getting into cheap labor to increase profit.
Score: 36 Votes (Like | Disagree)

imageWIS
'We want coders to work for us just like small children do making overpriced iPhones: as economic slave laborers'

There, I fixed it for him.
Score: 22 Votes (Like | Disagree)
Read All Comments

Friday August 12, 2022 2:34 pm PDT by Juli Clover
There's just about a month to go until Apple holds its annual September event focusing on new iPhone and Apple Watch models. We thought we'd take a quick look at everything that's rumored for Apple's September event to give MacRumors readers a rundown on what to expect when the first fall event rolls around. iPhone 14 The iPhone 14 can probably be described more as an "iPhone 13S" because...
Read Full Article • 125 comments

Friday August 12, 2022 12:46 pm PDT by Juli Clover
Samsung this week launched its fourth-generation foldable devices, the $1,000 Galaxy Z Flip and the $1,800 Galaxy Z Fold. Though there's no sign of a comparable Apple foldable device on the horizon, rumors suggest prototypes are in the works, so we thought we'd take a look at Samsung's newest smartphones to see what Apple needs to measure up to when a foldable iPhone does come out. Subscribe ...
Read Full Article • 233 comments