Wednesday May 8, 2019 4:32 am PDT by Tim Hardwick
Apple Pay arrived unexpectedly in Iceland today, allowing bank customers to use Apple's mobile payment system for iPhone, iPad, Mac, and Apple Watch wherever they see the contactless logo. 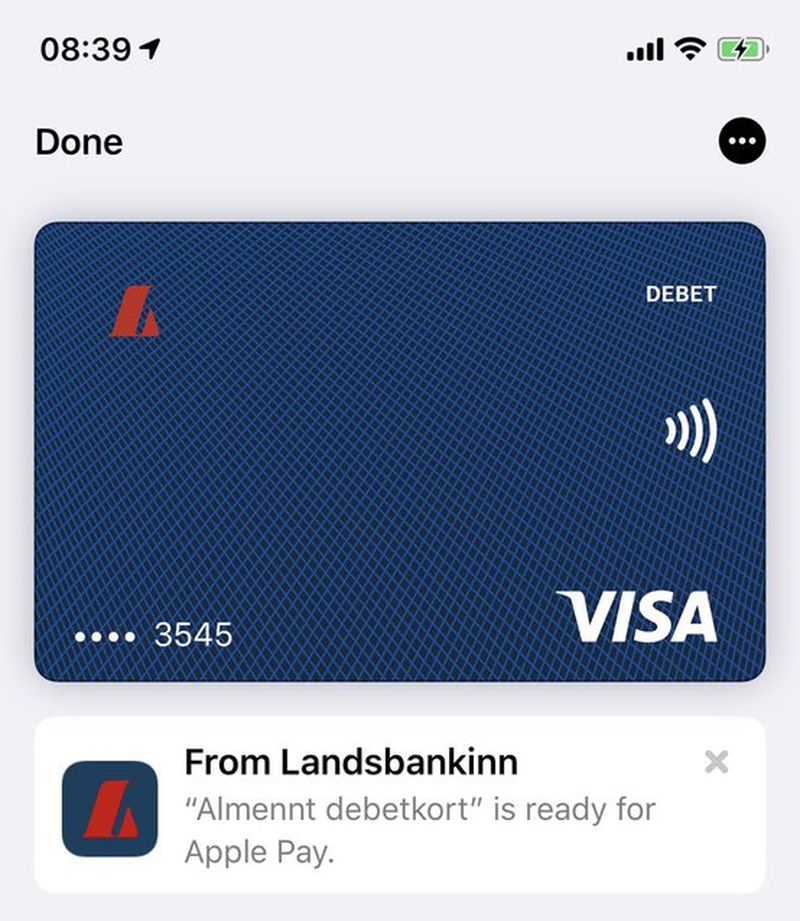 International payment solutions company Valitor is said to have played a key role in bringing ‌Apple Pay‌ to the country, with Landsbankinn and Arion banki among the first Icelandic banks to announce support for the digital wallet.

As to which country will get the next ‌Apple Pay‌ rollout, it's currently a toss-up between The Netherlands and Portugal, where regional banks have teased that Apple's contactless payment system is "coming soon."

maartenz95
I hope this means a launch in the Netherlands is very close..
Rating: 4 Votes

I hope this means a launch in the Netherlands is very close..


I hope for your sake you get it soon too. It’s a revelation and I can’t live without it. I use it for 95% of purchases and even changed banks to access it in Australia.

It’s also way more secure than physical bank cards. If you lose a bank card or it gets skimmed/duplicated you have to suspend most access to your account and it takes a week or more to get a replacement. No wonder people want NFC purchasing in phones.

I rarely even bother taking a physical card out anymore unless I know I need cash, but many banks do cardless cash withdrawal at ATMs now too, just not mine yet unfortunately.
Rating: 4 Votes

You have omitted Czechia, Austria etc… Well, that's Central Europe, who would bother with these countries. :(


++ Germany. It's the second time they have. MacRumors editors aren't the sharpest tools in the box.
Rating: 3 Votes


It was announced this morning around 8am. It is a total suprise. The infrastructure has been ready for few years, so it was a matter of Apple and the banks to make a deal.
Rating: 3 Votes

Til hamingju Ísland!
[doublepost=1557348185][/doublepost]The country launch isn't so important as the bank and retailer uptake.
I'm in New Zealand, who've had it for a few years now, and my bank (Kiwi Bank) still don't offer it.
Westpac & ANZ are the only 2 banks here to offer Apple Pay. It was just ANZ until Westpac recently gave in and joined. This is all due to the Australian cartel of banks trying to force Apple to "let them in" on NFC.
Recently a retailer told me that the "Pay Wave" (contactless pay point) system costs more per transaction which is why so many retailers here in NZ don't offer it.
So the real news in any country announcement is how many banks (or what percentage) ?

⅔ of main banks, or 66%. That lone bank was asked when they would support it. They got cought, Oops, so they said they were working on it and gave few weeks until ready. Someone didn’t do his job there!
[doublepost=1557350034][/doublepost]

Another 200,000 adult users, potentially. And that's not counting tourists from nearby continents.

Actually Apple Pay worked in Iceland for tourists with foreign ApplePay cards for two years until now, that the locals can use it
Rating: 2 Votes

They never announced, as far as I know, it just appeared this morning in the app and the news. Very nice surprise!
Rating: 2 Votes

Wake up to Apple Pay. Stop letting the Swiss Banking Kartell dictate to you.

If Iceland can launch it, LLB and LGT at minimum can too!