Thursday April 25, 2019 3:09 am PDT by Tim Hardwick
A number of iPhone and iPad users this morning are taking to Twitter and Reddit to report an issue with the App Store that prevents them from downloading or updating apps.

The problem starts when a user taps the Get button on an app listing, whereupon a pop-up informs them that "Apple Media Services Terms and Conditions have changed" and that they must read and accept them to continue. 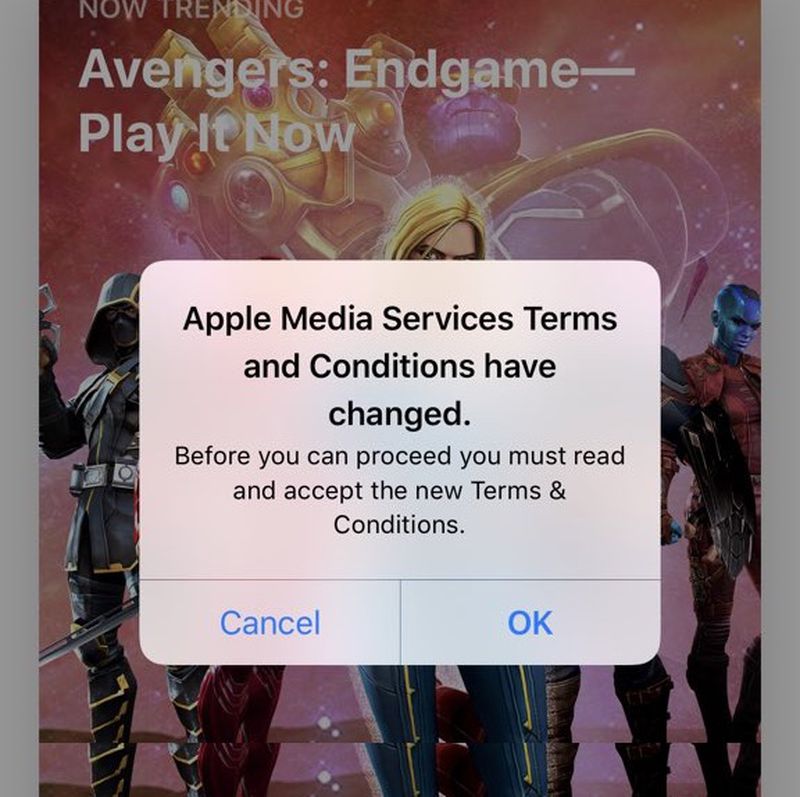 Anyone facing this issue or is it only me ?
Every time I click agree it pop up again & again! @Apple @AppStore @AppleSupport #Apple #IPhone #AppStore #AppleSupport #IOS12 pic.twitter.com/5RB7bhJtmx


However, tapping OK and then agreeing to the terms and conditions simply sends the user back to the app's ‌App Store‌ listing where they're asked to read and accept the T&Cs again, thus begetting an endless loop.

The T&C issue is being reported by users in different countries, and also appears to be affecting Apple's communication servers, with some users receiving multiple duplicate emails notifying them of a change in Apple Media Services terms. Yet Apple's System Status page is currently reporting no problems.

One user reported that simply tapping Cancel when the T&C notification first pops up made it go away, allowing them to download or update the app in question, but this hasn't worked for others. Have you been affected by the T&C issue currently besetting the ‌App Store‌? Let us know your experience the comments below.

calstanford
Thank our Lord and Saviour Tim Cook for turning Apple from what was once a venerable hard- and software company creating world class computers and mobile devices into a half-assed Media Services company.

It's what Yahoo! tried to do twice. And look where they are now
Rating: 17 Votes

Started happening on my daughter's iPad and iPhone today (both with the same account). Have spent 3 hours trying to fix this now, including a complete wipe of the phone. What a complete and utter joke!

Why wipe the phone and restore when it is clearly a server side issue?
Rating: 14 Votes

martyjmclean
If Apple are expecting Services to be their next Big Thing, they better start improving that back-end.
Rating: 10 Votes

Renatzz
Threy said its now apple priority but they dont now how long its gonna take to sort out this problem! WestonHarvey1
"Endless T&C Loop" sounds like a Black Mirror episode. Having your brain uploaded and waking up after death only to find your existence consists of a modal dialog box you can't dismiss. For every second in the real world, you experience 1,000 years in your simulation and the technician responsible for fixing the bug is taking a long lunch today.
Rating: 2 Votes

meaning-matters
Same in UK an hour ago. Actually saved me money because I've decided not to purchase in the mean time :-)
Rating: 2 Votes