Popular Mac drag-and-drop app Yoink received a substantial update on Monday, adding a number of new features, as well as many smaller improvements. 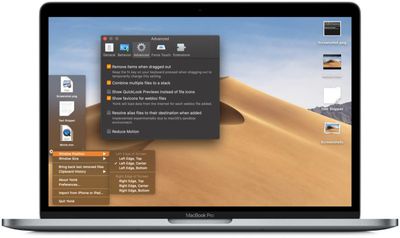 For those unfamiliar with the app, Yoink aims to simplify the action of dragging and dropping files and app-content on the macOS desktop by providing a temporary place for files to be dragged to. Yoink fades in when you start a drag - either with files from Finder or app-content, like an image from a website - offering you a temporary place for your dragged files.

With your files temporarily docked in the Yoink pane and the mouse free, you can more easily navigate to the intended destination of files, which is especially helpful when moving and copying files between different windows, Spaces or (fullscreen) apps.

Today's update takes the app to version 3.5.3 and introduces Continuity Camera support, so you can now save photos and documents from your iPhone or iPad right in Yoink. Yoink's position on the screen can be adjusted more easily, too. Previously you had to click the cog icon and select from a location from a menu of options, but now you can just drag the Yoink shelf window itself.

Also in this release, a "Save as" option has been added to the contextual menu when you right-click a file, allowing you to not only move or copy a file this way, but also rename it. Additionally, when Yoink is the active app, you can now use the keyboard to navigate the app (arrow up, down, select all, Quick Look).

Another couple of useful modifiers have been added, such as holding down the function (fn) key to keep a file in Yoink wile dragging it out, and holding the same key down to temporarily disable Yoink when dragging a file. It's also now possible to double-press the keyboard shortcut (by default, F5) to quickly add your clipboard contents to Yoink.

Meanwhile, improvements include better drag recognition, more efficient CPU usage, intelligent ignoring of drags that occur when playing games, and better compatibility with Transmit, DevonThink, and Apple's Remote Desktop app. Several bug fixes have also been implemented in this version, including some strange behaviors when using Yoink with Handoff.

Yoink for Mac is currently available for $5.99 (usually $7.99) on the Mac App Store. Yoink is also part of Eternal Storms' Software Bundle, together with ScreenFloat and Transloader, which reduces the apps' individual cost by 25 percent. A free 15-day trial version of Yoink is available on the developer's website.

martyjmclean
Yoink is one of those apps you don't think will be useful because there's "nothing wrong with my current workflow" - and then you're quickly proven wrong.
Score: 3 Votes (Like | Disagree)

I guess if people don't know how to use the OS properly someone will try and make a profit from it.

You've clearly never used this app. It *extends* what the OS provides. Try using something before slating it.
Score: 3 Votes (Like | Disagree)

Yoink is one of those apps you don't think will be useful because there's "nothing wrong with my current workflow" - and then you're quickly proven wrong.

Yep. It's one of the first few things I put on a new Mac -- makes full-screen apps SO much easier to use.
Score: 2 Votes (Like | Disagree)
Read All Comments