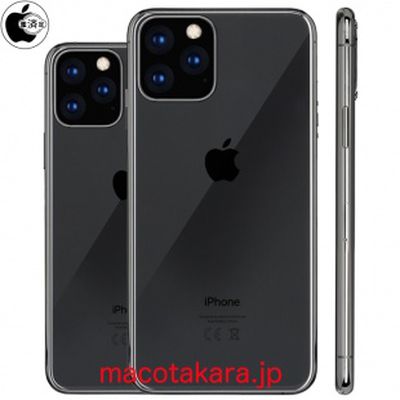 Citing reliable sources in the Chinese supply chain, the report claims that the two new ‌iPhone‌ models would come with 6.1-inch and 6.5-inch OLED displays and the previously heavily rumored triple-lens camera system.

The report goes on to suggest the two new models will have a thicker body to compensate for the larger camera module, so the 6.1-inch model will be around 0.15mm thicker than the existing ‌iPhone‌ XS, while the camera bump will see a 0.5mm reduction in protrusion.

Likewise, the body of the 6.5-inch model will supposedly be 0.4mm thicker with a camera bump reduced by 0.25mm, which equates to an overall 0.2mm thickness increase over the current ‌iPhone‌ XS Max.

Mac Otakara claims the two new models will come with a USB-C to Lightning cable and an 18 Watt USB-C power adapter, with an ability for the rear of the phone to wirelessly charge Qi-compatible devices like Apple Watch and AirPods 2 "likely."

In general, the rumor mill narrative suggests triple lens camera systems are a given this year, but most other leaks – from OnLeaks in particular – have implied that the three-lens camera won't be exclusive to any one ‌iPhone‌, and certainly don't suggest it will be a unique feature of additional models in Apple's lineup.

Given the leftfield claims, today's report should be taken with a grain of salt, although Mac Otakara has provided accurate information on unreleased iPhones in the past, so it's possible there's something to it.

Wonder if Apple will switch to aluminum back, given their failure with the chargining mat.

Yea you can use any third party wireless charger, but it takes forever; beats the purpose

Not if you charge your phone overnight, then it doesn’t really matter how long it takes. I don’t understand why so many people don’t charge their phones overnight, I mean it’s just laying there while you sleep, why not have it charging?
Score: 50 Votes (Like | Disagree)

Jsameds
I just want a ~5" all screen phone, all I see are devices and rumours for ~6" and up phones.

jonnysods
As Edmund Blackadder would say: this is as about as subtle as a rhinoceros horn up the backside.
Score: 19 Votes (Like | Disagree)

That's my point, the whole song and dance with going to all glass was for wireless charging. Now that they failed in that department, shouldn't they switch back to aluminum back? Much more durable and my gosh, so much lighter!

The phones charge just fine wireless, no failure there. What they failed at was to produce their own Apple branded charging mat. Are you saying they should disallow wireless charging after already offering it?
Score: 16 Votes (Like | Disagree)
Read All Comments