Darkroom for iOS, a popular photo editing app, today received a major update that adds a lot of new functionality to improve the way it interacts with the iPhone and the iPad.

In the Photos app, you will find a new photo editing extension for using Darkroom's tools to edit images without leaving the ‌Photos‌ app. You can tap on the (...) menu when editing an image to get to the Darkroom settings. 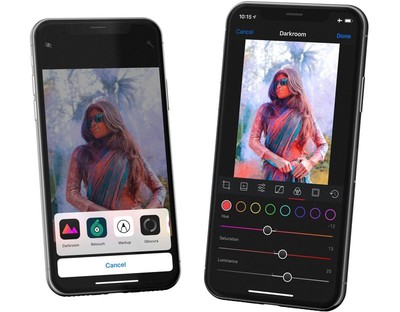 A new Share Extension within the ‌Photos‌ app will allow you to choose an "Edit in Darkroom" feature to open up Darkroom from ‌Photos‌ for the full editing experience. There's also a Copy to Darkroom feature that you can use to transfer images from apps like Dropbox or Files over to Darkroom for editing purposes.

On the ‌iPad‌, Drag & Drop support has been implemented, so you can drag and drop photos into the Darkroom library to start a photo editing session while in Split-View mode on a supported device. You can Drag & Drop a single photo or multiple photos.

When using Darkroom, the Album Picker in the app has been updated to work with the Files app, so you can browse various images that you've stored in files or in third-party storage apps like Dropbox. Imported files are stored in a new Imported Smart Album.

Many other small improvements have been added to Darkroom, including sorting photos by Date Added, Batch tool enhancements on the ‌iPad‌, better responsiveness, and a change that disables location data by default.

Darkroom can be downloaded from the App Store for free, but unlocking all of the app's tools will cost $9.99. [Direct Link]