A new Sports Illustrated article offers a look inside Apple's so-called sports surveillance room at its Results Way office complex in Cupertino, California, where a team of Apple employees have been monitoring sports events for newsworthy and unpredictable moments for almost a year now. 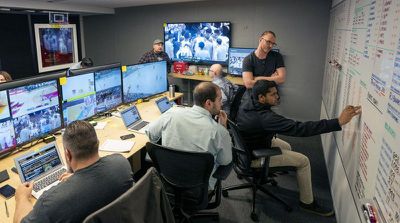 The report says the team manages the sports subsection in Apple's TV app and its Apple TV interface, highlighting what's available around the clock and sending notifications about exciting moments like a playoff game reaching triple overtime.

"It was amazing to watch, but the vast majority even of Lakers fans didn't see it," said Cue. "As a fan, I've always looked at it as an opportunity."

For now, though, Apple doesn't appear to have any larger ambitions with sports. Asked how much he thinks about competing against Facebook and Amazon, both of which have experimented with airing live sports games on their platforms with exclusive rights, Cue responded "not a lot, honestly."

"That's not to say we would never do sports, because who the heck knows," he said. "Never is a long time, but I don't think that's a problem right now." Sports rights are deeply fragmented, with different owners split by platform and region. "You really can't own all the rights, so therefore at some point you need to solve some other problems," Cue said. "You can't design for owning the rights because if that's the only thing you're doing you're always going to be tiny."

In other words, don't expect Apple to have its own sports broadcasts in its widely expected streaming video service, although it could provide sports content from partnered networks.

jjhny
Whatever Eddy Cue says always seems to be wrong. He is like Apple's reverse barometer.
Score: 8 Votes (Like | Disagree)

Cosmosent
That's another Missed Opportunity by the team of Cook, Schiller, & Cue !

(High-Bit-Rate) 1080p60 streaming is probably the Holy Grail of Live Sports, yet NON-existent here in the States.

If AAPL was being run by "true" Sports fans, they would have implemented High-Bit-Rate 1080p60 a long, long time ago !

And, it's a MUCH smarter business proposition to spend $1B+ USD on getting into High-End streaming, than arriving late to the game in a competitive video streaming market.

I suspect Cook, Schiller, & Cue ALL have "Hollywood envy" ... otherwise, this wouldn't be happening.

To me, it makes NO business sense.

There are UN-tapped Golden Opportunities out there, & they (i.e., Cook & Co) just try to copy what others have already done !

The root cause of the problem is the Hands-OFF Board Jobs put in place when he took over the last time.

All detailed in the Steve Jobs Bio.

Cook is a Bean Counter, Schiller is there to protect Cook (NO ONE would consider him Cook's replacement), & Cue (I have NO idea why he is still @ AAPL, probably for the same reason Cook keeps Schiller around).

IMO, "the Dumbest guys in the room" are running one of the most valuable companies in the world !

Steve Jobs got what he wanted, & they are running with it !

The hands-OFF AAPL Board gets most of the blame !

Cook should have been replaced about 5 years ago.
Score: 8 Votes (Like | Disagree)

BvizioN
Good, because I wouldn't care.
Score: 7 Votes (Like | Disagree)

mrow
I spy one of those crazy people that covers up the camera on their laptop with tape.
Score: 6 Votes (Like | Disagree)

Aeolius
No quidditch? No deal.
Score: 4 Votes (Like | Disagree)
Read All Comments