Apple's long-awaited AirPower could be launching in the near future, based on coding changes that 9to5Mac's Guilherme Rambo says he found in the latest iOS 12.2 beta, released yesterday morning.

There have been "significant changes" to the wireless charging code in the beta update, including "code responsible for identifying that two devices are charging on the same mat," which could indicate that Apple is planning an ‌AirPower‌ launch soon. 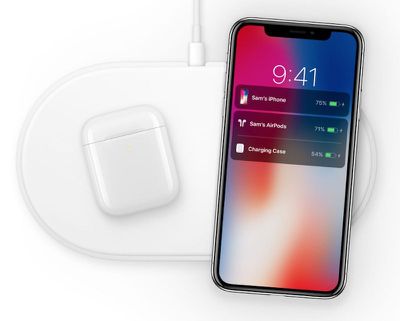 In the iOS 12.2 beta specifically, there are changes to the 3D animations that are displayed on the largest of the charging devices to let you know charging levels.

Apple has been silent on the ‌AirPower‌ ever since announcing it, but there have been continual signs that the Cupertino company is still working on it, including multiple recent rumors that a launch is happening in the spring.

Apple on Monday introduced a new iPad Air and an iPad mini 5, and today introduced refreshed iMacs, suggesting it is perhaps aiming to roll out all of its spring hardware updates ahead of its services-focused event on March 25.

Ahead of when the iPads and iMacs launched, we heard from a source that suggested Apple would debut new products on Monday through Wednesday, with a new iPod touch set to be announced tomorrow. We haven't heard word of an ‌AirPower‌ launch or an AirPods launch with new wireless charging case, but that doesn't mean it's not going to happen.

There's a chance we will see ‌AirPower‌ and AirPods this week, but if not, it certainly seems like we're at least a bit closer to a debut.

Is it one of the most delayed Apple products?

Pretty much, although we have been waiting on a half-decent Mac Pro since December 2013.
Score: 18 Votes (Like | Disagree)

Apple's long-awaited AirPower could be launching in the near future, based on coding changes that 9to5Mac's Guilherme Rambo says he found in the latest iOS 12.2 beta, released yesterday morning.

I'm beginning to think there is nothing that cannot be predicted by looking at iOS code.

justiny
18 months to launch a product they hyped at a keynote.

SirChristopher
It would be a huge mistake to not launch the AirPower mat alongside the second generation AirPods.
Score: 6 Votes (Like | Disagree)
Read All Comments