IKEA today confirmed its plans to announce the Symfonisk line of speakers during the Milan Furniture Fair, which takes place next month. The Symfonisk speakers come out of a long-term partnership between IKEA and Sonos, resulting in unique products like a speaker that doubles as a bookshelf. 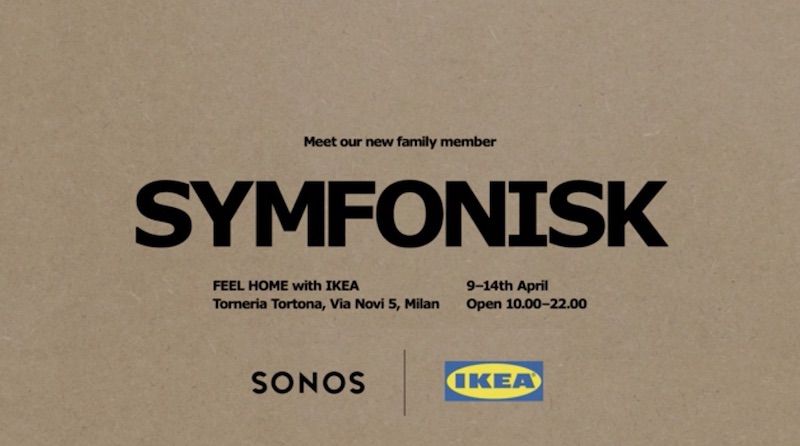 Neither company has released information about what the final version of the speakers will look like, but customers can expect the entire Symfonisk line to provide music playback with an extra purpose in your home's furnishing. IKEA put out a short video highlighting the Symfonisk speakers, but it appears the company has blurred out the actual speakers in the home set-up seen in the video, wanting to save the hardware reveal for next month's announcement.

The press release today also emphasizes the unity of sound and light, suggesting there could be more announcements from IKEA's smart lighting branch, or a product that combines the two.

There’s sound, and there’s light. What if we combined them both? Two hugely important elements for creating the right mood around the home. This was the starting point for making the playful exhibition FEEL HOME in Tortona in Milan. The results? It is best experienced on site, the ambition has been to share knowledge through fun interactive installations based on everyday life activities.

“Together with Sonos we wanted to combine our home furnishing knowledge with their expertise in creating great sound experiences for every room of the home, and in Milan we want you to experience the real difference that sound and light makes in your life”, says Björn Block, Business Leader for IKEA Home Smart at IKEA of Sweden.

During IKEA's Democratic Design Day in Sweden last summer, the furniture company said that the Symfonisk system will fully integrate with other Sonos products as well as IKEA's Trådfris smart home line of lights and switches. Other prototype ideas suggested that a Symfonisk speaker will be compatible with many of IKEA's furniture products thanks to a bracket system, turning the speaker into a free-standing wall shelf or allowing customers to place it under a Metod kitchen cabinet.

In other IKEA-related news, the company today announced that it's delaying the release of its smart blinds until later in 2019. The smart blinds were originally set to launch in the United States on April 1, but IKEA decided to push back the release because it found "an opportunity for improved functionality," and the blinds need to have their firmware updated before the launch.

For the Symfonisk speakers, users can expect to hear more details about the IKEA and Sonos partnership sometime during the Milan Furniture Fair, which takes place April 9 through April 14 this year.

G5isAlive
I am looking forward to seeing exactly what they have in mind. Not so sure about a shelf that is a speaker... wouldn't there be a vibration issue? Will have to wait and see. I typically like SONOS products, have 9 in my house.
Rating: 4 Votes

Speaking as someone who once had an entire home full of Sonos products, I can tell you HomePod just blows Sonos away in terms of sound quality and seamless integration with all your Apple devices.

Sonos feels old and dated in every conceivable way.


How does your HomePod sound as your home theatre surround sound when connected to your TV and watching cable? Dated?
Rating: 3 Votes

bpa1093
Does this come with a package of meatballs?

Ad13
But that’s really limited no? My Sonos multiroom system links through to my OLED TV. I have surround sound through Dolby 5.1 to my Apple TV, but also my Sonos provides 5.1 sound with cable or any other media connected to HDMI. Why do you think the HomePod is a better option? It only works with Apple TV - no Dolby 5.1, no sub, no HDMI connectivity.
Rating: 2 Votes

Speaking as someone who once had an entire home full of Sonos products, I can tell you HomePod just blows Sonos away in terms of sound quality and seamless integration with all your Apple devices.

Sonos feels old and dated in every conceivable way.

What’s dated is that you can’t use your $300 HomePod speaker for your cable tv or video game system. #next
Rating: 1 Votes

Don1985
I’m very interested by this. Love Sonos and have more IKEA furniture than I care to admit!

I’ll hold off on buying a Beam until after this. Might not make a difference but I can wait to see.
Rating: 1 Votes

StellarVixen
Will I have to assemble the speaker myself?
Rating: 1 Votes

rictus007
I will need to assembly the speaker?
Rating: 1 Votes

rmariboe
Bang & Olufsen soo missed out by not getting on the Sonos train while they had the opportunity!
Image: B&O visual design with Sonos software and a collaboration in acoustics design. Unbeatable.
This will be a boon for IKEA and Sonos booth!
Rating: 1 Votes
[ Read All Comments ]