Fitbit today announced its latest smartwatch, the Versa Lite Edition. Priced at $160, the Versa Lite is $40 cheaper than the standard Versa model released last year and less than half as much as the Apple Watch Series 4, which starts at $399. 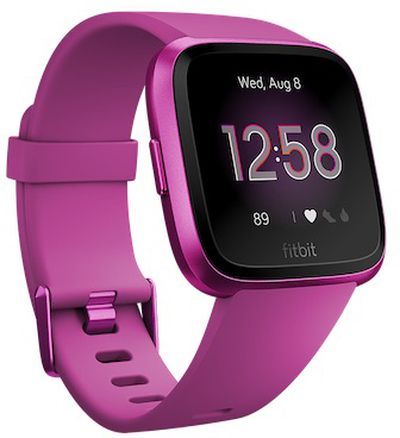 Nevertheless, the Lite Edition has most features you would expect from a fitness tracker, including step counting, calories burned, sleep tracking, heart rate tracking, guided breathing sessions, and more than 15 exercise modes.


Compared to the Apple Watch, the Versa Lite Edition is unsurprisingly basic. It has fewer apps, lacks built-in Wi-Fi, GPS, or optional LTE, can't be used for contactless payments, doesn't have a microphone for voice control, and so forth. The simplicity of the Versa Lite does allow for up to four-day battery life though.

Fitbit is the world's second largest smartwatch vendor according to estimates, but it trails Apple by a significant margin, so it's clearly attempting to win market share with an aggressive pricing strategy. This includes the also-announced Inspire, Inspire HR, and Ace 2 fitness trackers priced between $70 and $100.

Fitbit's New Versa Lite Edition Does Less Than Half as Much as the Apple Watch ('https://www.macrumors.com/2019/03/06/fitbit-versa-lite-edition-vs-apple-watch/')

xDKP
Well despite the looks of the thing, it’s not really a smartwatch but rather a square shaped fitness band
Score: 19 Votes (Like | Disagree)

Baymowe335
Who cares? Apple products are all about iOS integration.

H3LL5P4WN
Does it still include the "leak your data everywhere" feature?
Score: 9 Votes (Like | Disagree)

BvizioN
Not on the same league! So, of course, it should be a lot cheaper!
Score: 8 Votes (Like | Disagree)

chelsel
This is a pretty nice offering. I love my Apple Watch S3, but realistically I usually only use it for heart rate, sleep, steps and checking the time.
Score: 6 Votes (Like | Disagree)
Read All Comments