International Women's Day is March 8, but Apple plans to celebrate women throughout the entire month of March with a new Girls Who Code partnership, special Today at Apple sessions at Apple Stores, an Activity Challenge, and more. 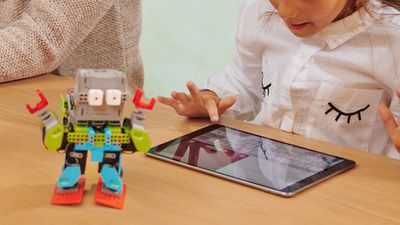 First, Apple is partnering with Girls Who Code to support new coding opportunities for girls and young women in the United States. Using Apple's Everyone Can Code curriculum, 90,000 girls and Girls Who Code Club facilitators in all 50 states will have the opportunity to learn Apple's programming language Swift.

Swift training will also be provided for club leaders to help expand the number and reach of coding clubs. Apple supports educational opportunities for students of all ages and backgrounds, and advocates for girls’ right to access the same learning opportunities as their male counterparts through its Developer Academies, Everyone Can Code curriculum and work with the Malala Fund and National Center for Women and Information Technology.

Second, in select Apple Stores around the world, visitors can attend over 60 Today at Apple sessions in a new "Made By Women" series throughout March. Sessions will be held in select stores in Singapore, Kyoto, Hong Kong, London, Milan, Paris, Dubai, San Francisco, Chicago, New York City, and Los Angeles.

Third, Apple Watch users around the world can earn an exclusive badge and iMessage stickers when they complete a walk, run, or wheelchair workout of a mile or longer on International Women's Day, which is Friday, March 8 this year.

Fourth, every App of the Day featured in the App Store in March in the United States will highlight an app founded, developed, or led by a woman, including Bumble, TheSkimm, and Stitch Fix. Apple will also be promoting women across Apple Music, iTunes, Beats 1, Apple Books, and Apple Podcasts.

Women have earned the opportunity to have our ideas shape the future. We're excited to support Girls Who Code as they empower girls to be the developers and tech innovators of tomorrow.

As a computer teacher, this is great, because there is a large discrepancy between the amount of boys, compared to girls, involved in or taking an interest in coding/technology.

As the owner of a plumbing company, in the business since my parents founded it in 1968, 100% of our plumbers and 100% of our applicants have been men.

I do wonder why I've never seen a 'girls who plumb' initiative.

Please don't find something to complain about here. This is a good thing.

Real female coders will have it hard to earn respect from colleagues cause it is hard to know if they were hired for skills and talent or for politics.
Score: 25 Votes (Like | Disagree)

Real female coders will have it hard to earn respect from colleagues cause it is hard to know if they were hired for skills and talent or for politics.

Too much common sense for the hipster/Millennials in this thread.
Score: 20 Votes (Like | Disagree)

Baymowe335
Please don't find something to complain about here. This is a good thing.
Score: 19 Votes (Like | Disagree)

Please don't find something to complain about here. This is a good thing.

Can we go back to segregation and bussing, too? I'm assuming those must be 'good things' also now that we've discovered that balkanizing people into small identity groups is a positive thing again.
Score: 17 Votes (Like | Disagree)

As a computer teacher, this is great, because there is a large discrepancy between the amount of boys, compared to girls, involved in or taking an interest in coding/technology.

Yeah just like there is a large discrepancy bewteeen the amount of boys compared to girls, playing with barbie puppets and dressing in pink.
Is this a problem though?
Score: 8 Votes (Like | Disagree)
Read All Comments