Apple Pay Rolling Out in Czech Republic and Saudi Arabia

Apple Pay is rolling out to users in Saudi Arabia and the Czech Republic, according to multiple reports from tipsters and posts across social media this morning. 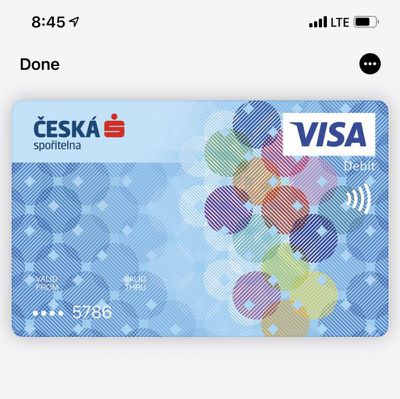 Apple's digital payment system already appears to be active for a number of banks and financial services across both countries. In Czech Republic, users have so far reported successfully adding cards to their mobile wallets from Air Bank, MONETA Money Bank, Ceska sporitelna, and payments company Twisto.

When ‌Apple Pay‌ was rumored to be coming to the country in late February, support for the country's two largest banks Česká spořitelna and Komerční banka was mooted, so hopefully they'll also be added to the "active" list soon.

Apple said in October that ‌Apple Pay‌ would be "coming soon" to the country, and reports are coming in from users who have successfully registered cards with ‌Apple Pay‌ issued by the above banks.

‌Apple Pay‌ has been gradually expanding across Europe, Asia, and the Middle East. The service launched in Belgium and Kazakhstan in November and made its long-awaited debut in Germany the following month.

‌Apple Pay‌ first launched in the United States in October 2014, and has since expanded to many other countries, such as the United Kingdom, Canada, Australia, China, Singapore, Switzerland, France, Japan, Spain, Italy, Sweden, Finland, Denmark, Russia, New Zealand, Brazil, Poland, Ireland, and Ukraine.

souko
I come from Czech Republic. I added debit card (VISA) of Česká Spořitelna to my iPhone and Apple Watch. I have payed by iPhone and by Apple Watch too. It is great. I am really happy...

Not most important thing but it made me happy...
Score: 5 Votes (Like | Disagree)

iPhysicist
I applaud our fellow neighbors! Next is an Apple store in Prague I hope!
Score: 3 Votes (Like | Disagree)

For countries that already have contactless payment, I’m still surprised how long the rollout is taking.

Apple Pay has worked fine in these countries when on holiday with a UK card.

I used it in Switzerland and Czech Republic before it launched for domestic customers.

It's all about the banks and the negotiations. I'm pretty sure Apple would just love to be present in as many countries as possible but there's always a deal involved.
Score: 2 Votes (Like | Disagree)

For countries that already have contactless payment, I’m still surprised how long the rollout is taking.

Yeah, in Romania even the smallest store has contactless payment!
But banks prefer to invest in they **** services that are not compatible with iOS, only with Android.
Score: 2 Votes (Like | Disagree)
Read All Comments