The U.S. Patent and Trademark Office earlier this month approved for publication a trademark application from Apple for the term "iPod touch" that would extend protection to cover "Hand-held units for playing electronic games; Handheld game consoles" under International Class 28 (games, toys, and sporting goods).

Apple has held a trademark for the ‌iPod touch‌ name since 2008 under International Class 9 (audiovisual and information technology equipment) with the following description: 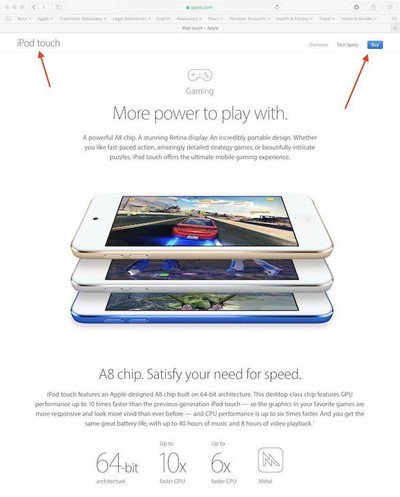 As part of its justification for the new trademark application under gaming consoles, Apple submitted a screenshot of its iPod touch overview page scrolled to the "Gaming" section, with red arrows calling out the product name and the "Buy" button.

The ‌iPod touch‌ has of course been a handheld gaming console since its launch over a decade ago, so it's unclear why Apple has waited until now to extend its trademark coverage to include the area. It could be a purely defensive move to protect against competitors or other challenges, but given rumors last week of Apple working on a seventh-generation ‌iPod touch‌ some three and half years after the last update, there's naturally some speculation that there could be more to this.

We haven't heard any specific rumors about what to expect in a seventh-generation ‌iPod touch‌, but we expect Apple to keep spec upgrades fairly minimal in order to maintain a low price point to appeal to customers who can't or don't want to step up to an iPhone.

Apple's new application will be published for opposition on February 19, and unless viable third-party opposition to Apple's claim appears, the company will be granted the trademark later this year.

AngerDanger
Hopefully they're keeping this thing around. I remember it being a great introduction into the iOS ecosystem when I was a kid, and using the iPod as a game console evokes a sense of nostalgia.

In fact, after learning that Epic was removing the Infinity Blade trilogy, I dug out my old 3rd generation iPod and synced massively out-of-date apps to it from the old family PC. It now serves as a shrine to gaming on the App Store circa 2008:

if the released an updated Touch with new internals and 256gb ram id buy one in a minute if it was priced reasonably, i still use mine almost everynight to listen to music and podcast as i fall asleep. My Max is charging next to me and its just easier to throw the touch next to me on the pillow

Superhappytree
Actually now would be the perfect time to introduce new iPod Touch models with these crazy AF iPhone and iPad prices.
Score: 14 Votes (Like | Disagree)

CanadianGuy
If/when Apple releases an update iPod touch (assuming ~$200 USD), it'll be an instant buy for me. I like to have a dedicated device connected to my audio system for streaming music that has no personal info on it so it can be left without a passcode turned on. This way guests can just queue up songs etc as they want.
Score: 5 Votes (Like | Disagree)

2807
Hmmm, let's see, how can we re-purpose all of this crap we have left over when people didn't buy the iPhone..?

I know, we will leave out the phone stuff and resurrect the iPod touch.

Splendid...splendid.....
We will make it.
And we will call it fancy.

m4mario
Next generation iPod touch is going to be 4.7 inches, the size of an iPhone 6 and processor of the iPhone X. It will be marketed as a gaming device and will not be updated for another 3 years.
Score: 5 Votes (Like | Disagree)
Read All Comments

Friday June 11, 2021 1:13 pm PDT by Joe Rossignol
On his newly launched Front Page Tech website, leaker Jon Prosser has shared renders showing off the alleged design of the next-generation iPad mini, which he says are based on schematics, CAD files, and real images of the device. In line with details shared earlier this month by Bloomberg's Mark Gurman and Debby Wu, Prosser claims that the new iPad mini will feature slimmer bezels around...
Read Full Article • 159 comments

Saturday June 12, 2021 12:36 pm PDT by Joe Rossignol
During the Platforms State of the Union at WWDC this week, Apple unveiled a new API for iOS 15 and iPadOS 15 that enables developers to implement an on-screen virtual game controller in their iPhone and iPad games with just a few lines of code. While many iPhone and iPad games already offer on-screen controls, Apple's new virtual game controller is available to all developers, easy to add,...
Read Full Article • 42 comments

Saturday June 12, 2021 7:01 am PDT by Sami Fathi
In a currently unlisted ad on YouTube, Apple is promoting the versatility, portability, and power of the M1 iPad Pro in a fun musical inspired by The Little Mermaid's "Part of Your World" soundtrack. In the ad, which features the main character using an M1 iPad Pro, Magic Keyboard, and Apple Pencil, multiple users can be seen struggling with their old PCs indoors while hoping that they can...
Read Full Article • 355 comments