Nintendo earned approximately $348 million from its iOS and Android apps in 2018, according to new estimates shared this week by analytics firm Sensor Tower. 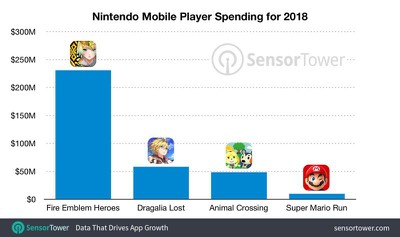 Much of the money that Nintendo earned came from Fire Emblem Heroes, its most popular title. Fire Emblem Heroes accounted for approximately 66 percent of Nintendo's 2018 revenue, with more than $230 million spent in the game across the globe.

Since its debut, Fire Emblem Heroes has earned more than $487 million.

Though it is Nintendo's newest game, Dragalia Lost brought in an estimated $58.4 million worldwide, while Animal Crossing: Pocket Camp, which turned a year old in November, earned Nintendo $48.6 million during 2018.

In 2019, Nintendo plans to expand its portfolio of mobile titles with the launch of Mario Kart Tour, set to be released in March. Like Fire Emblem Heroes, Dragalia Lost, and Animal Crossing: Pocket Camp, Mario Kart Tour will be free to play and supported through in-app purchases.

Not a knock against Nintendo in particular, but I have to wonder how much more good might be done with the money people are spending on virtual goods for virtual games (inevitably lining the pockets of wealthy corporations), when it might be better spent by paying real people for real goods, perhaps making a real difference in the real world.

People complain about "the system" being rigged, with increasingly large concentrations of wealth being held by a select few. The sad fact is, many people simply choose to fritter their money away.

Watcha talkin' bout? People play games to have fun and distract themselves from the outer world. Paying for this is like paying for a music or video subscription service like Spotify or Netflix, or even regular cable plans.
Score: 8 Votes (Like | Disagree)

JosephAW
And not one cent from me. How about you?
Score: 2 Votes (Like | Disagree)

Not a knock against Nintendo in particular, but I have to wonder how much more good might be done with the money people are spending on virtual goods for virtual games (inevitably lining the pockets of wealthy corporations), when it might be better spent by paying real people for real goods, perhaps making a real difference in the real world.

People complain about "the system" being rigged, with increasingly large concentrations of wealth being held by a select few. The sad fact is, many people simply choose to fritter their money away.

People do work at corporations and do get paid to create the games and apps. $350m is small compared to what Apple milks from the users purchasing the devices to play these games.
Score: 2 Votes (Like | Disagree)

On consoles where it makes sense.
Score: 1 Votes (Like | Disagree)

And not one cent from me. How about you?

Me too.
Score: 1 Votes (Like | Disagree)
Read All Comments