Sphero, known for its popular BB-8, BB-9E, and R2-D2 iPhone-controlled droids, today confirmed that it is discontinuing all licensed products.

In a statement provided to The Verge, Sphero CEO Paul Berberian confirmed that Sphero is cleaning out its remaining licensed inventory and has no plans to produce more. 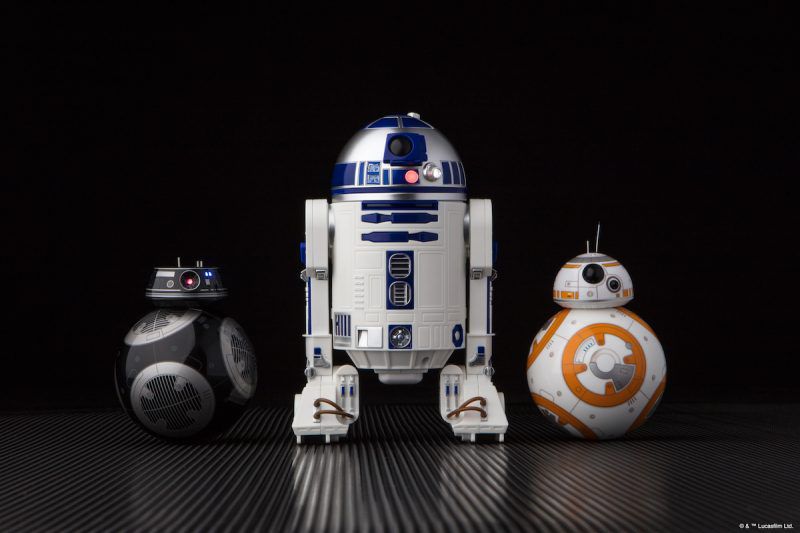 Sphero will no longer make BB-8, BB-9E, R2-D2, Lightning McQueen cars, or talking Spider-Man toys. None of the products are available from the Sphero website anymore, with Sphero instead selling its own Bolt, Mini, and SPRK+ products.

The licensed products are now "legacy products" no longer in production, though App Support is set to continue for at least two years.

Berberian said that Sphero is discontinuing its Disney partnership because the licensed toy business "required more resources" than it was worth, with sales waning over time after a movie was released.

"When you launch a toy, your first year's your biggest," he says. "Your second year's way smaller, and your third year gets really tiny." The opposite is true of the company's non-licensed educational robots, he says, which become more popular year after year.

With its licensed partnerships at an end, Sphero will now focus on expanding its educational ecosystem with the goal of getting more products into schools.

Update: Sphero has provided a statement on its plans not to renew its Disney licenses:

At Sphero, our goal is to keep kids learning through the excitement of play. Through our Disney partnership, we were able to develop robots that allowed iconic personalities to come to life. As we develop a roadmap for the future, Sphero products will continue to build on our successes, expand interactive play and STEAM learning efforts, while keeping products accessible for all ages.

In today’s world, we know STEAM education is more important than ever. There’s a huge opportunity to inject our technology into this field to teach kids crucial real-world skills, through fun, interactive learning. Sphero robots are currently in 20,000+ schools and in many more homes; our vision is to bring coding into every classroom and living room.

In 2019, we will not be renewing our Disney licenses. We’re looking forward to a future of many new products that continue to encourage STEAM learning through play. Look for a new product to be announced at CES that inspires creativity and taps into the A of STEAM learning.

With the new announcement about Sphero's focus on education, the online Apple Store is now selling Sphero's Bolt robotic ball, introduced back in September. Bolt is aimed at teaching children basic programming with advanced sensors, an LED matrix, and infrared communication.

Now I'm really conflicted about what to do—try to see if I can setup an Amazon account to sell this thing and make a hefty profit, or give my daughter a Christmas present I know that she'll love? It's also getting close to the wire on getting her a replacement. What would you guys do?


So the choice is whether to give your daughter something she'll love or making a few bucks. Is this a joke?

My polite response: Toys are meant to be played with. Give it to her and enjoy her happiness.
Rating: 7 Votes

roar08
Too bad. I was hoping for a BB-8 TLJ edition that rolls 30 minutes longer than you want it to, and in frequently meaningless directions.
Rating: 7 Votes

djeeyore25
Drat! I was so looking forward to their Star Wars Holiday Special collection.
Rating: 6 Votes

Father of the year right here.

What’s your child’s happiness when there’s $940 on the table.

Yeah that’s easy for you to say. So you wouldn’t even consider it? Not even for a moment? I bet you go silent like the last guy. Like my kid couldn’t be happy with another toy…you must have never been poor in your life if you can just shrug off $1000 which buys a whole lot more toys and then some. It’s difficult for me to get out of that mindset sometimes. I grew up in a lower income abusive household.

Lots of people love to crap all over fathers. Makes me wonder how many of the accusers are trying to make themselves feel better about being a bad dad themselves. I had a bad father growing up. A father who abused me physically and verbally. A father who played mind games and always had me scared. A father who would slam my head into the side of the bathtub repeatedly, punch holes in walls, throw me across the room, tell me how I was a bleeping piece of bleep among other things, who punched me so I ran away from home, a father who placed his job above his family, a father who became a grandfather and at the earliest hint of him starting to do the same thing to his grandchildren was cut out of their lives forever by me because I had the courage to finally stand up to him. My own mother disowned me because of that. I lost two sisters over that. They are still captive to him.

I am definitely not a bad father and have been praised before on the forums for the way I parent in other discussions. I teach my kids that possessions like toys aren’t important. When I’m building something or fixing something on the house I include my daughter, and more recently my son now that he is old enough. I get them involved and allow them to gain a sense of pride from a job well done that they had a role in. When they have a question about the world I more often than not take the time to sit down with them and explain the basic science behind what is going on in a way that they can understand (including sketches on the iPad), along with related processes and how it all works together. I have been recruited to much higher paying jobs in my field (I am basically what is known as a unicorn, I do full stack web design and development and am also a photographer and app/print designer). I took a lower paying job at a university and is less stressful in a smaller town so that I can be with my family more (no overtime, 10-15 minute commute) and raise them in a safe place, while also building platforms and resources for people like George P. Smith who won the Nobel Prize in Chemistry a few weeks ago and is working to make the world a better place.

And you know what? By the time you had written your comment I had already decided to give my daughter the one thousand dollar robot toy so stick that in your pipe and smoke it. Being a good father is a process that you have to work at it every day. I may not be father of the year but I’m definitely a contender, so get off my back and go find someone like my dad and harass them.
Rating: 5 Votes

Sphero is discontinuing its Disney partnership because the licensed toy business "required more resources" than it was worth...


In other words, Disney probably doubled or tripled the licensing fees.
Rating: 4 Votes

So the choice is whether to give your daughter something she'll love or making a few bucks. Is this a joke?

My polite response: Toys are meant to be played with. Give it to her and enjoy her happiness.

It’s a toy and $1000 is $1000. So you’re telling me that a week before Christmas someone shows up at your house and offers you $1000 to buy a toy you paid $60 for your kid for Christmas and you wouldn’t consider it, especially if you could use that money to get even more toys? She has other toys already lined up for Christmas and I would use part of the money to get her something nice. She already probably has too many toys. We buy a lot of extra toys second hand for our licensed daycare so there are a lot of toys around the house. That being said I don’t really need the $1000, I just grew up kinda poor so it still seems like a lot to me. My grandpa’s voice is in my head telling me to be cheap!

If you can get a grand, sell it. I'm sure you already have other Christmas presents for her and she won't miss what she doesn't know about. You can ask her if there's one thing she really, really wants and possibly get that for her. Guaranteed she'll enjoy it and you'll have money to spread further.

Yeah this is what I was thinking, I wasn’t quite sure if I would get that much, like if they are actually selling on Amazon (and I would be a new seller with 0% feedback) or if it would go down after Christmas? I could also do eBay but they’re only going for $350 there and at that point with the seller fee and potential risk and $60 I already spent, IDK if it’s worth the hassle. And so realistically that’s probably the truer market value.
Rating: 3 Votes

TheWatchfulOne
So... with the Disney licensing ending, does this mean I shouldn't expect iOS-controlled levitating Maximillian, Vincent, and Bob toys?
Rating: 3 Votes

YaBe
App support only for 2 years? I mean when you make a toy that relies on a phone, either you release a remote control when you are done with it or you should support it.

This is planned obsolescence, you want to play with your toy? too bad you upgraded the phone.
Rating: 2 Votes

I was really tempted to buy that BB-8 for my daughter that was only like $50-60 on Amazon. The problem is she would always have to use her iPad to control it and we've set strict limits on her iPad time. Around that time I was also thinking about the Ollie—are they discontinuing that as well? It has been out of stock on their site for a long time and can be difficult to find online, especially in certain colors. Hopefully they are just replacing it with an Ollie 2 while clearing inventory. I kind of want one, lol.

Speaking of licensed robot toys, a few years ago I stashed away a Wall-E RC robotic toy for my daughter who wasn't old enough yet to play with it. I found it at Toys R Us (RIP) for $60 which was a good deal when I looked it up online. I had forgotten about it until I was cleaning out and organizing my storage room so I figured I would just give her the Wall-E since she still loves robots and that movie. I happen to look it up online a couple days ago and it's going for nearly $1000 on Amazon (link ('https://www.amazon.com/Disney-Pixars-U-Command-Remote-Control/dp/B0016N2E1I/')). Now I'm really conflicted about what to do—try to see if I can setup an Amazon account to sell this thing and make a hefty profit, or give my daughter a Christmas present I know that she'll love? It's also getting close to the wire on getting her a replacement. What would you guys do?

If you can get a grand, sell it. I'm sure you already have other Christmas presents for her and she won't miss what she doesn't know about. You can ask her if there's one thing she really, really wants and possibly get that for her. Guaranteed she'll enjoy it and you'll have money to spread further.
Rating: 2 Votes

iZac
Not that I’ve charged my BB-8 in a year or so I don’t really have a problem, but they mention App Support will continue for two years ... so little BB-8 will be a paperweight in 25 months time?
Rating: 1 Votes
[ Read All Comments ]