Epic Games today announced that its Infinity Blade role-playing game trilogy has been removed from the App Store. 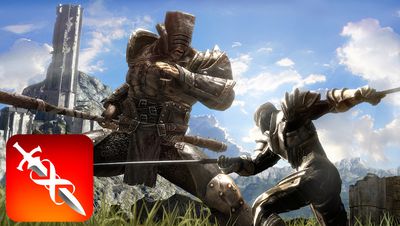 In a blog post, the video game studio said "it has become increasingly difficult for our team to support the Infinity Blade series at a level that meets our standards," adding that the trilogy "will always hold a special place" in its history.

Along with the three Infinity Blade games, all in-app purchase options have been removed, according to Epic Games. iPhone users who already purchased the games will remain able to play them, and re-download them from the App Store using the same Apple ID that was originally used, for the foreseeable future.

The news was first reported by Eli Hodapp at MacRumors sister site TouchArcade, who described the trilogy as "an absolute App Store staple" that "even the harshest critics of mobile gaming could admit were, at minimum, pretty good."

Infinity Blade is a gesture-based fighting game that debuted on the App Store in December 2010 following an on-stage preview at an Apple event three months prior. At the time, TouchArcade reviewed the game's console-like graphics as "the best we've seen so far on the App Store," raising the bar for mobile games.


Infinity Blade II followed in November 2011, while Infinity Blade III was released in September 2013. Both sequels also received stage time at Apple events, and remained critically acclaimed in 2018, despite the latest title being five years old.

"Premium games eventually losing the support of their developers then slowly falling into obscurity before being removed from the App Store isn't really a new phenomenon," said Hodapp, "but for it to happen to Infinity Blade seems like an incredibly terrible signal for the overall health of the App Store."

Epic Games now has a multi-billion-dollar valuation thanks to the success of its smash-hit battle royale game Fortnite, so the company certainly has the cash flow needed to keep the Infinity Blade trilogy alive, but they are evidently moving on.

Over the next month, Epic Games said it will continue to support Infinity Blade III with updated Clash Mobs and other surprises. It has also made its Infinity Blade sticker pack available for free in the App Store for iMessage. And it looks like the Infinity Blade sword will live on as a weapon in Fortnite.

mgollaher92
More like “We make more money than we ever imagined with Fortnite, and don’t see the point”
Score: 36 Votes (Like | Disagree)

Yeah, but eventually it won’t be downloadable. Happens to a lot of apps over time.

And the permanent iOS updates will render it inoperable entirely before long.

Meanwhile I can still play games from the 90s on a current Windows machine.
Score: 26 Votes (Like | Disagree)

hlfway2anywhere
Apple needs to throw it's weight behind the Apple TV as a gaming device and revive iOS gaming. They really screwed that up from the beginning.
Score: 23 Votes (Like | Disagree)

Soba
This is an example of why I look at 100% digital distribution of media with a lot of unease.

There is an enormous community of gamers who love playing classics on old hardware, but are we really going to be able to play these all-digital games even 10 years from now? Emulation is great, but 1) It is not always practical, and 2) It is often impossible to replicate the same user experience of playing on native hardware, thus defeating the purpose.

There have already been examples of content owners not just removing their media from distribution, but forcibly deleting that media from customers' devices. Even without that heavy-handedness, it's unlikely that these publishing platforms have any kind of longevity and they might just die of neglect over the years. Old content is sometimes impractical to re-license for a new platform and it will just disappear.

I buy a lot of digital media, but these days I'm buying certain paper books and rare movies on disc; at least that way the people who sold them to me can't force their way into my home and set them on fire.
Score: 22 Votes (Like | Disagree)

"Premium games eventually losing the support of their developers then slowly falling into obscurity before being removed from the App Store isn't really a new phenomenon," said Hodapp, "but for it to happen to Infinity Blade seems like an incredibly terrible signal for the overall health of the App Store."

This is one reason why gaming on the iOS really sucks.
Score: 21 Votes (Like | Disagree)

Abs_p
Is it just me or anyone else find the game extremely repetitive ?
Score: 21 Votes (Like | Disagree)
Read All Comments