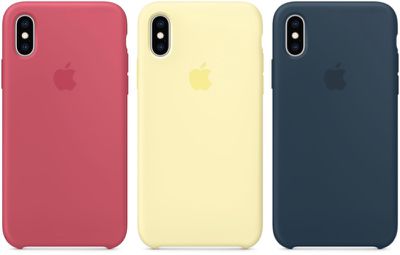 The new cases and bands are generally available for delivery as soon as next Monday, with in-store availability estimated for next Tuesday.

Despite the introduction of new case colors for the iPhone XS and iPhone XS Max, there is still no sign of Apple-branded iPhone XR cases.

brendu
I just dont get apple here. The XR is the higher selling model and they dont sell cases for it. Apples cases are almost entirely profit for them. They sell $5 worth of case for $50. Why on earth arent they making cases for the XR?
Score: 16 Votes (Like | Disagree)

Those look like kids Swatch bands. Not sure what self respecting adult would wear such cheap childish looking bands.

Pretty sure you don’t have to buy them or wear them.
Score: 13 Votes (Like | Disagree)

Sevanw
Those look like kids Swatch bands. Not sure what self respecting adult would wear such cheap childish looking bands.
Score: 12 Votes (Like | Disagree)

jerry16
Say what you will about Apple, but they really have a way with describing colors.
Score: 11 Votes (Like | Disagree)

zorinlynx
I wonder why the lack of XR cases. Seems like an easy quick buck for Apple, without much effort, especially since the XR is the best selling model this year.
Score: 11 Votes (Like | Disagree)

Those look like kids Swatch bands. Not sure what self respecting adult would wear such cheap childish looking bands.

but we are still kids at heart. who cares what you think you old self-respecting adult
Score: 10 Votes (Like | Disagree)
Read All Comments

Friday August 12, 2022 12:46 pm PDT by Juli Clover
Samsung this week launched its fourth-generation foldable devices, the $1,000 Galaxy Z Flip and the $1,800 Galaxy Z Fold. Though there's no sign of a comparable Apple foldable device on the horizon, rumors suggest prototypes are in the works, so we thought we'd take a look at Samsung's newest smartphones to see what Apple needs to measure up to when a foldable iPhone does come out. Subscribe ...
Read Full Article • 313 comments