Apple Pay is Set to Launch in Germany

Apple Pay is about to launch in Germany. Banks such as HVB and Bunq this morning sent out emails to customers announcing their imminent support for Apple's mobile payment system in the country. 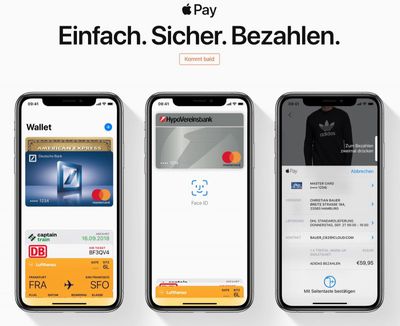 Apple Pay is "coming soon" according to Apple's own regional German website, which lists supported banks and cards, including boon, comdirect, Edenred, Fidor Bank, Hanseatic Bank, and Vim Pay. We'll update this article as soon as we can confirm that Apple Pay is operational in Germany for end users.

Apple Pay support in Germany has been rumored for some time, while Apple has been working to establish deals over fees and other factors with German banks.

Bug-Creator
That list of banks excludes the vast majority of of Germans atm.

So unless Apple can get the likes of Sparkasse,Volksbank,Postbank and DeutscheBank to join this won't get far.
Score: 12 Votes (Like | Disagree)

That list of banks excludes the vast majority of of Germans atm.

So unless Apple can get the likes of Sparkasse,Volksbank,Postbank and DeutscheBank to join this won't get far.

I know lots of people who switched banks in order to use Apple Pay (e.g. N26).
The old Banks have no idea what a young generation wants – those banks will eventually die out.

That's what I thought. I have used to pay at Frankfurt airport just a few months ago.

Dude NFC payment is not limited to Apple Pay.
We have wireless credit cards for quite some time in Germany already (and thus the terminals). But as I said earlier, no bank supports it yet. So if you're German and have a German bank you cannot put your credit crd in Apple Pay.

I cannot believe it. Finally after all those years.

So unless Apple can get the likes of Sparkasse,Volksbank,Postbank and DeutscheBank to join this won't get far.

Deutsche Bank is included in the list of banks that will support Apple Pay from start. And most younger people don't use Sparkasse anyways.
Score: 5 Votes (Like | Disagree)

Maybe Germany should start using credit cards first, still find myself having to pay cash like 90% of the time.

Same in Austria/Japan, anyone got some insight?

Well, credit cards can be used in major stores in Japan, but part of it is to do with the prevalence of IC (stored value) cards like Suica, PASMO, ICOCA, etc which have been providing widespread contactless payments for a lot longer than credit cards have in other countries. Contactless IC cards have been around for about 17 years, and their use for transit means a huge proportion of people in Japan have been using them for a long time. They have no barrier to entry (because they aren't a credit card), they're faster to use than credit cards, they're widely accepted for purchases in stores, vending machines, etc, and can be recharged via a credit card or bank account automatically anyway.

So the long term prevalence of IC cards means credit cards have been the ones trying to play catch up. Why would someone use a credit card in Japan when IC cards have been around longer and accepted in way more places? (the "credit" nature of credit cards was also probably a hard sell culturally by banks in Japan after the distrust created by the Japanese financial crisis of the 1990s)

And also years before the iPhone even existed, IC cards were already available on phones in Japan in the form of what's known as Osaifu-Keitai (i.e. mobile wallet) support. Japan was well ahead of other countries in mobile phone technology in the 1990s and early 2000s.

So basically, IC cards were there first and still provide superior convenience today. (edit: I should clarify that all of the above is talking about every day purchases like food, taxis, convenience stores, supermarkets, buses, trains, vendors, and so on - for expensive purchases like buying a TV or other electronics, paying for a hotel, etc, credit cards will almost always be accepted in those situations anyway)

If you visit Japan, do yourself a favour and pick up a Suica card, or if you have an iPhone 8 or Apple Watch Series 3 or above, you can just create one directly in Apple Pay using the Suica app. This is what I did a couple of weeks ago when I was lucky enough to be able to make another visit.

Suica has been available on Apple Pay for a few years (starting with the Japan-specific models of the iPhone 7 and Apple Watch Series 2), and it's proven incredibly popular there. Apple Pay also natively supports the recharge of Suica cards from any Apple Pay Visa, Mastercard or Amex card as well, making it particularly handy for inbound travellers.
Score: 4 Votes (Like | Disagree)

This is interesting. On my last trip to Japan I tried adding a (physical) Suica card to Apple Pay but couldn't get it to work. Later I read in the Apple support article that the device region needs to be set to Japan. But that is a huge hassle for international travelers because (among other things) it will disable credit cards from your home country in Apple Pay AFAIK. Is there any way around this?

Also, they really need to add some other languages to the Suica app ...

If you want to transfer a physical Suica card to Apple Pay you need to change the region temporarily so that the option shows up, but this has no impact on your credit cards from your home country - they won't be deleted or disabled.

Yes, it would be handy if they would provide an English localisation for the Suica app :D It is a deceptively large app if you enable the full account functions, but most people will use it just to create a new Suica, which is much easier. (by the way, if you want to use the app to create a new Suica card, you don't even need to change the region)

For people wanting to visit Japan and use Suica, it's much easier/quicker if you create a new card using the Suica app rather than transfer a physical card into Apple Pay. Unlike a credit card, because Suica and other IC cards are stored value and not necessarily attached to any account or owner, they can only exist in one place at a time, so transferring a physical card in to Apple Pay permanently disables the original physical card.

There's a very detailed guide that describes how to use all the functions of the Suica app for non-Japanese speakers over here: https://atadistance.net/all-about-suica-app/ It covers how to create a new card, along with much more complicated functionality that I think most foreigners should avoid unless you know some Japanese.
Score: 4 Votes (Like | Disagree)

Did you note that it will support Visa, Amex, Mastercard and Maestro (EC)? That should have more than most people covered.

Nope. Apart from American Express, that's not how it works.
Score: 4 Votes (Like | Disagree)
Read All Comments