Friday November 2, 2018 12:08 pm PDT by Juli Clover
The first Geekbench benchmark for one of the 2018 Mac mini models has surfaced (via VentureBeat), giving us an initial look at the performance we can expect from Apple's revamped desktop machine.

The benchmarked model is a higher-end custom configuration that features a 3.2GHz 6-core 8th-generation Intel Core i7 processor, UHD Graphics 630, and 32GB RAM. At a minimum, this configuration would cost $1,699. 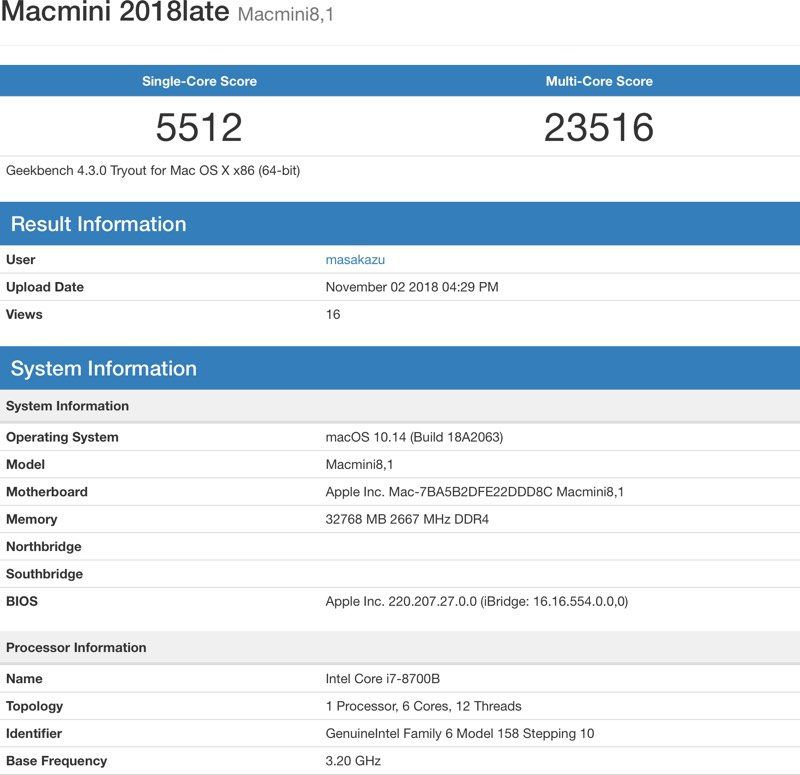 The higher-end score set puts this particular Mac mini configuration right on par with the high-end 2.9GHz 2018 MacBook Pro, which earned a single-core Geekbench score of 5433 and a multi-core score of 22556. Given the price point of this Mac mini's configuration, its MacBook Pro-matching performance comes as no surprise.

It's not clear why there's such a disparity between the two Geekbench readings, but it's possible with the first that background tasks produced a lower result, hence the retest.

We should see additional Mac mini benchmarks surfacing in the near future as the device is set to launch on November 7. Benchmarks of the base models will give us a better idea of what to expect from the lower priced versions of the device.

MacBook Air and iPad Pro benchmarks have also surfaced over the course of the week, with the iPad Pro also demonstrating MacBook Pro-class performance.

seatton
I still have about 1,000 days to decide whether I should get it or not before the newer model comes out.
Rating: 88 Votes

SoN1NjA
Apple's new strategy: don't update your products for 1000 days so when you update them the performance gains seem big
Rating: 32 Votes

The base models are a joke and shouldn't exist at those price points.

No way. All these models are fantastic updates, coming in cheaper than the 2011 and 2012 quads with loads more expected performance.
Rating: 27 Votes

Will be interesting to see results for the base models.


The base models are a joke and shouldn't exist at those price points.
Rating: 23 Votes

Mockletoy
I see a lot of people talking about how expensive and underpowered the base level Mini is, but yesterday I went to the MicroCenter website and started putting stuff in the cart to more or less replicate the Mini.

So, an i3 w/ a decent (quiet) cooler for it, a mini-ITX motherboard (only 1 Thunderbolt port), some RAM, an SSD (much slower than the Mini's, probably), case (bulkier than Mini), PSU, all that stuff. Not top of the line stuff, just what I considered good quality at good prices. My cart ended up totaling around $600 after taxes.

By the time you add in the time I'd spend building it, plus more intangible but still valuable things like the Mini's industrial design, macOS without any Hackintosh hackery, Apple's support system, and the 4 Thunderbolt 3 ports that I simply couldn't replicate with a PC build, the base asking price starts looking pretty fair to me.

Anyway, that helped me get some perspective. If the new Minis turn out to be solid, with no thermal throttling issues or anything like that, I'm thinking maybe ... just have to wait for the reviews and the first batch of folks to get their machines unboxed and tested out.
Rating: 17 Votes

Jack Burton
I want to see cinebench numbers and performance on sustained load, like rendering for 4 or 5 hours. I wonder if the enclosure is just too small to handle that.

I'd love to throw a couple of minis in the other room as quiet render nodes.
Rating: 15 Votes

In other words, it performs almost identically to PCs with a similar processor. Magical.

Yes and do you know why? Do you want me to share that secret with you? But I'll have to whisper, so that others don't hear? You alright with that? OK.

OK, that is enough..

Are you ready? OK, here we go:

I honestly don't understand the allure of the mini for existing Mac users. It's too expensive to be a reasonable media server choice, too under-powered to be a pro workstation, and obviously lacks the portability of a laptop. It honestly seems like most experienced users would be better off with either waiting until Apple releases new Pro towers or going an entirely different route for their particular needs.


It's a perfect little machine for my music studio rig. It's small, quiet and the selection of ports (not forgetting the 4 thunderbolt 3 ports) are the ideal way to connect all my peripherals. My audio interface connects via thunderbolt, then I have additional thunderbolt ports to add an array of external storage/hubs etc. I need to add a couple of monitors (1 in my control room, and 1 in the recording room) so the HDMI and thunderbolt 3 ports are a perfect combo. It's far more flexible than an iMac display, as I can also connect a second laptop or GoPro to the display via HDMI if I wish. I don't need a 16 core Xeon workstation, but I do require a reasonably fast CPU and access to a decent amount of RAM to run audio plugins etc. I'm glad there is no discrete GPU in there, and only the integrated one - after owning a MacBook Pro 2011 with the dGPU failures, I'm keeping well clear. - Also it's just an extra source of heat to add inside that small enclosure - so just creates more problems in terms of throttling and down-clocking, due to poor thermals (although it remains to be seen how much the thermals have improved in the 2018 model). It's the ideal machine to use an eGPU with, since there is no internal display (which eats up thunderbolt bandwidth anyway). That's something I may add down the road if I need beefier graphics. I can also upgrade the GPU in the future, (and cool it properly) - unlike the GPU soldered inside the iMac's. Plus, any displays I buy are not glued to the computers internals - so if any component fails, I can swap it out/upgrade/add to it over time, rather than having to toss the whole thing out (like an all in one iMac) - so this is a big benefit to me.

I have considered many times building a Hackintosh, but I've read pages and pages of forums with people trying to get Thunderbolt 3 to work 100% reliably (including hotswap ability). I've also not seen any PC/Hackintosh that is able to support 4 Thunderbolt 3 ports either. At the end of the day, I'd rather spend my time trying to create music, rather than tinkering with a Hackintosh to get certain features to work.

So for me, the Mac Mini 2018 is the ideal machine, and suits my needs perfectly.
Rating: 12 Votes

I honestly don't understand the allure of the mini for existing Mac users. It's too expensive to be a reasonable media server choice, too under-powered to be a pro workstation, and obviously lacks the portability of a laptop. It honestly seems like most experienced users would be better off with either waiting until Apple releases new Pro towers or going an entirely different route for their particular needs.


I find it interesting that nobody remembers audio and music users. I’ve been relying on the 2012 quadcore mini for ages now, and the 2014 model was the biggest blow Apple ever dropped on us. Audio does not require dedicated graphics. Audio guys usually place an analogue desk or DAW controller between the keyboard and the monitor. Try working on a 5K iMac from almost a meter away. Not an easy task, I can tell you. Try placing a TV behind a tall iMac. Not the ideal position, either.

The mini allows us to run larger TVs as monitors and don’t force us to pay for stuff we don’t need, such as 5K displays or dedicated graphics. Pro audio users need lots of cores AND as high as possible single core performance. That’s why the cheesegraters are now getting long in the tooth, as they struggle to keep up with the latest generation of VIs. Even one instance of something like U-he’s Repro 5 can bring an old Xeon to its knees today. Or a nice plate reverb from Waves. The single core perfomance simply isn’t there for real time performance and low latency at the same time.

Not every pro user works with video or needs a gorgeous 5K display, although every youtube reviewer will certainly focus only on Finalcut, Photoshop and Premiere for sure. That’s annoying and incredibly biased.

For every music producer, the mini is the perfect glove: very powerful machine without the things we already have or don’t need. Even the iMac pro hasn’t been popular amongst audio users, as most of what is offers is video oriented an useless to us, while also been insanely expensive.

I will be selling my 2012 mini and getting this new 6 core i7 soon. Even throttling doesn’t really matter for us, as long before a chip throttles, the audio would be experiencing drop outs, usually at 90% of maximum workload. We only need 100% CPU power for short periods of time, ie bouncing a track to the final mix, usually a 1-2 minutes task, done offline (no real-time audio being played). I’m sure the mini can handle this. I’m a happy pro in 2018 :)
Rating: 11 Votes