Apple Removes 11 Categories From the Mac App Store Categories Tab [Update: They're Back]

Apple has slashed the number of app categories listed in the Mac App Store's Categories tab, an apparently intentional move that may irk Mac users and developers who rely on the tab to aid app discoverability. 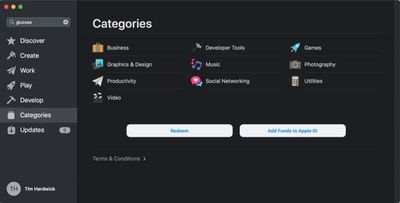 The tab now lists just 10 categories, down from the 21 it had listed since the revamped Mac App Store debuted with the launch of macOS Mojave in September. The missing categories include Finance, Lifestyle, Sports, Weather, Medical, Travel, Education, Reference, Entertainment, Health & Fitness, and News. That leaves the following 10 categories that users can still browse individually:

OK, thanks. As it turns out, what you are noticing is expected behavior. We always appreciate hearing customer feedback. You can leave your thoughts here: https://t.co/eTPVYVFyd8 — Apple Support (@AppleSupport) November 1, 2018

It's unclear at present why Apple has decided to hamstring the Categories tab, as the categories that are missing are still being used to classify apps in the Mac App Store, and Apple's documentation for developers on choosing a category for their Mac app hasn't changed. Currently, iPhone and iPad users remain able to browse all 21 iOS app categories individually in the iOS App Store app.

We've reached out to Apple for comment regarding the change to the Mac App Store and will update this article if we learn more.

Update: Apple brought back the 11 missing categories in the Categories tab as of Saturday morning. Why they were removed in the first place remains a mystery.

Many of the categories are not helpful when searching. Some apps match the category, but often it seems arbitrary.

It's pretty much guaranteed to be arbitrary now. If an app doesn't fit in 1 of 21 categories, it surely isn't going to fit in 10.
Score: 12 Votes (Like | Disagree)

It's already their biggest seller!
Score: 7 Votes (Like | Disagree)

Christoffee
The Mac App Store is so crumby. I am wanted an ID3 editor so went there. There were a load of apps that hasn’t been updated, or just generally looked crap, or by developers that had no website or anything so that I could confirm they were trusted.

So I get on the MacRumors forums and get recommended a fabulous app. The forums here are a far better resource for apps.
Score: 6 Votes (Like | Disagree)

orbital~debris
This is not good. A detriment to browsing the store.

I’d encourage anyone who agrees to log comments via Apple’s feedback webpage.
Score: 6 Votes (Like | Disagree)
Read All Comments