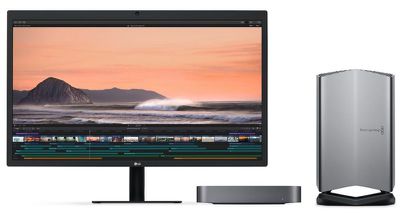 The eGPU is compatible with any Thunderbolt 3–enabled Mac, including the new space gray Mac mini and new MacBook Air with Retina display.

The Blackmagic eGPU Pro costs $1,199 and will be available to order from the Apple online store from late November.

The day is coming that we'll have cards with TB3 ports on them, and these custom solutions won't be necessary. I wonder why, given the price, they didn't just go for the Vega 64.

Yea, this will be a welcome change when it happens.
Score: 5 Votes (Like | Disagree)

nate13
The day is coming that we'll have cards with TB3 ports on them, and these custom solutions won't be necessary. I wonder why, given the price, they didn't just go for the Vega 64.
Score: 3 Votes (Like | Disagree)

That would absolutely annihilate this product. (Aside from size and noise level)

Apple needs to get off their high horse and start playing nice in this area. If they want to claim their “all in on egpu’s”, then they need to allow their efi to boot with eGPU’s attached. (Especially in Bootcamp) Not just select products they endorse for maximum profit.

I don’t understand Apples complete disregard for Bootcamp support this generation. If they are going to discontinue Bootcamp, I think I’m out all together. (17 year user here)
Score: 2 Votes (Like | Disagree)

I hear Nvidia are working on their ”Web Drivers” for Mojave at least. Maybe it won't include support for the 20xx initially, but since they added support for 10xx I don't see why we shouldn't see support fort 20xx too eventually. Especially now when MacOS has proper eGPU support. We'll see what happens…

Well at this point Nvidia stated they are not able to release anything because of Apple.

So whatever you hear on different forums are only people's speculations. Nvidia has not made too many official statements except the ones where they blame Apple.
Apple is deleting comments of Nvidia and Mojave topic on all of their forums.

I am not saying they will not release them, I only believe it will take a very long time.
Score: 1 Votes (Like | Disagree)

TeJo
$1200? Are. You. Kidding. Me. I just built a Mantiz Venus with a Vega 64* for around $800 (new enclosure, used card). The Venus has more USB ports, charges a full 85 watts AND supports an SATA hard drive, meaning as an enclosure, it mostly blows the BlackMagic away. My only complaint is that it doesn't have a second TB port for daisy chaining add'l storage, but that's a navigable problem.

I played with a BlackMagic a bit and it was very sleek and very quiet and setup flawlessly, but damn. $1200 for a prosumer card in a non-upgradable enclosure? In-sane.

*Technically speaking, the 64 draws too much power for the Venus' power adapter, but as long as you're not running it too hot, per Mantiz, it's fine. Plus, based on the construction, the adapter should be easily replaceable, if it ever gets to that point.
[doublepost=1540925238][/doublepost]

The day is coming that we'll have cards with TB3 ports on them, and these custom solutions won't be necessary. I wonder why, given the price, they didn't just go for the Vega 64.

My guess would be mainly price in that the 56 provides lower overhead and may be more readily available. (The 64 has been harder to find, which has kept its prices inflated.) Since this is a joint effort, Apple is probably also revenue sharing with BlackMagic, meaning both companies will try to keep their margins as wide as possible.

Apple should just have done this on their own. No idea why they didn't. Of course, their product would still be super duper expensive, as Apple gear do, but they could probably shave a few bucks off this price and control the ecosystem better. Plus, Apple could potentially have worked on a custom GPU which would have better targeted pro users and their own software. At the end of the day, the Vega is a gaming card and the BM has been optimized for BM software. So lots of users, myself included, will achieve better, but certainly not perfect results to our workflows. And $1200. Sheesh.
Score: 1 Votes (Like | Disagree)

aaronhead14
Pretty cool, but twice the price that it should be. It'll pair nicely with the also-overpriced $4,100 Mac Mini.
Score: 1 Votes (Like | Disagree)
Read All Comments