A Day With the iPhone XR: Unboxing and First Impressions

The iPhone XR is set to launch on Friday, October 26, and ahead of its release date, we were able to get our hands on a review unit from Apple.

We spent the day with the iPhone XR in New York City, checking out its feature set and doing a quick comparison with the higher-priced iPhone XS for all of our readers who are thinking of picking up Apple's most affordable flagship smartphone later this week.

Subscribe to the MacRumors YouTube channel for more videos.
The iPhone XR in our video is the black version, which looks fantastic with the glass body and matching aluminum frame, but it's worth noting the XR comes in several colors that are a bit more fun: white, yellow, coral, blue, and PRODUCT(RED).

Apple's iPhone XS features a higher-end sturdier stainless steel frame instead of the lower-cost aluminum frame in the XR, but the XR doesn't feel cheap. It's a premium device, just like the iPhone 8 and other older aluminum iPhones. 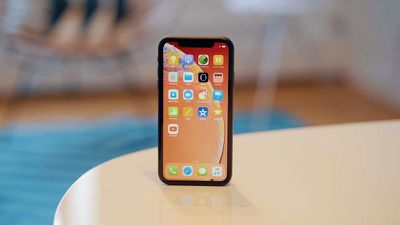 iPhone XR in the center
Like the iPhone XS, the iPhone XR features an edge-to-edge display with no Home button so there's plenty of screen real estate, but the bezels at the sides, top, and bottom are noticeably thicker, which is one downside.

The iPhone XR uses the exact same TrueDepth camera system with Face ID that's in the iPhone XS, which means there's still a notch at the top. Overall, though, the visible display is much larger than what you get with the iPhone 8 and it's almost the same as the XS and XS Max.

iPhone XR on left, iPhone XS Max on right
One of the most notable differences between the XR and the XS is the XR's "Liquid Retina" LCD display compared the OLED display of the XS. If you have both phones side by side, you're going to notice the lower 1792 x 828 resolution, but on its own, the XR's display is perfectly adequate. Basically, it looks totally fine for an LCD display, and, in fact, better than previous Apple LCDs.

There is no 3D Touch in the iPhone XR due to the technicalities associated with implementing an edge-to-edge LCD display, and Apple has replaced it with a Haptic Touch feature. Haptic Touch provides haptic feedback when long pressing on buttons like the camera or the flashlight, but it is in no way as fleshed out as 3D Touch and can't be used in as many places.

The iPhone XR's camera works with Smart HDR, Portrait Mode, and Depth Control, but there are some differences to be aware of. With Portrait Mode, some of the low light photos can look even better than with the iPhone XR because it's using the larger f/1.8 aperture wide-angle lens to capture the image instead of the smaller f/2.4 telephoto lens like the iPhone XS, which lets in more light.

Because there's no multiple camera system to use to calculate depth between the background and foreground for blurring purposes, Apple uses a person's face to determine what to blur and what to keep sharp. That means no rear-facing iPhone XR Portrait Mode images of pets, flowers, food, etc. You'll also get fewer Portrait Lighting options.

Smart HDR is similar between the two cameras, though the feature is a bit more hit or miss when it comes to the handling of highlights and complex lighting situations.

As for the front-facing camera, since it's exactly the same as the camera in the iPhone XS, you can do all of the same things and you have full access to Memoji and Animoji.

There are a few other differences to be aware of between the XS and the XR: the XR has a slower LTE Advanced connection instead of a Gigabit LTE connection like the iPhone XS, it has an IP67 water resistance rating instead of IP68, and it maxes out at 256GB of storage.

All in all, the LCD display, the aluminum frame, Haptic Touch, and the single-lens camera are the major differentiators between the two devices, and we don't feel like the iPhone XR's shortcomings are going to be a big deal for most consumers.

With the super fast A12 chip, Face ID, edge-to-edge display, glass body for wireless charging, the color options, the lower price tag, the XR is a great smartphone that's going to be an ideal choice for many people.

Do you have an iPhone XR coming on Friday? Why did you choose it over the XS? Let us know in the comments.

We're going to have in-depth iPhone XR coverage coming next week, including a deep dive into the iPhone XR camera compared to the iPhone XS camera, so make sure to stay tuned to MacRumors for more.

Is it just me or have phones, tablets, and computers are just plain boring nowadays. I just don't care to get the latest stuff anymore. Seems like every year there is less of a reason to upgrade. Same goes for my friends. I take it the market is fully saturated and this whole tech bubble is ready to pop.

Yeah. I also stopped upgrading my friends every year a while ago.
Score: 65 Votes (Like | Disagree)

NIKKG
Is it just me or have phones, tablets, and computers are just plain boring nowadays. I just don't care to get the latest stuff anymore. Seems like every year there is less of a reason to upgrade. Same goes for my friends. I take it the market is fully saturated and this whole tech bubble is ready to pop.
Score: 50 Votes (Like | Disagree)

Yeah. I also stopped upgrading my friends every year a while ago.

The market has become saturated for friends. I think we hit peak friend a few years ago.
Score: 36 Votes (Like | Disagree)

hipnetic
Now they just need to make a sub-XS-sized version of this phone for even cheaper, to serve as the new SE.
Score: 31 Votes (Like | Disagree)

bigjnyc
This phone seems like a great value. I always prefer the top of the line model, but I can see this being the smart choice for a lot of people. Apple did well here.
Score: 19 Votes (Like | Disagree)

This phone seems like a great value. I always prefer the top of the line model, but I can see this being the smart choice for a lot of people. Apple did well here.

Me and my wife bought iPhone X last year. If we were both in the market for a new phone this year, it would be hard to ignore the $500 we would save on two of these phones over 2 XS.
Score: 16 Votes (Like | Disagree)
Read All Comments