London's High Court on Monday blocked attempts to bring a collective lawsuit against Google over alleged historical snooping of millions of iPhone users in the United Kingdom (via Reuters).

The lawsuit's claimants alleged that Google illegally gathered the personal data of over 4 million iPhone users in the U.K. between 2011 and 2012 by bypassing the default privacy settings on Apple's smartphones which allowed it to track the online behavior of users browsing in Safari. 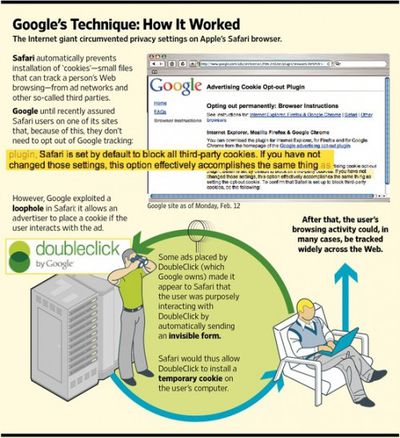 Original explanation of the "Safari Workaround" in 2012 WSJ article
Veteran consumer rights campaigner Richard Lloyd, who led the collective 20,000-strong lawsuit, had claimed that Google's "Safari Workaround" breached the U.K. Data Protection Act by taking personal information without permission, and wanted the tech giant to pay out several hundred dollars in damages to each person affected. As a ballpark figure, a claim by 5.4 million people for £500 each would result in a £2.7 billion ($3.63 billion) payout for Google.

When the case was first brought in November 2017, it was the first time a collective action has been brought in the U.K. against a leading tech company over alleged misuse of data. "Collective action" is where one person represents a group with a shared grievance, similar to a class action lawsuit in the U.S.

However, Google said it was "not new" and vowed to defend itself, having defended similar cases before. "We don't believe it has any merit and we will contest it," said the tech giant at the time. On Monday, the court ruled in Google's favor.

"Today's judgment is extremely disappointing and effectively leaves millions of people without any practical way to seek redress and compensation when their personal data has been misused," Lloyd said in a statement.

"Google's business model is based on using personal data to target adverts to consumers and they must ask permission before using this data. The court accepted that people did not give permission in this case yet slammed the door shut on holding Google to account."

A similar case occurred in the U.S. in 2012, when Google and several other advertising agencies were discovered to be circumventing privacy protections in Safari for iOS in order to track users through ads on numerous popular websites.

At the time, Safari blocked several types of tracking, but made an exception for websites where a person interacted in some way — by filling out a form, for example. Google added coding to some of its ads that made Safari think that a person was submitting an invisible form to Google, and thus Safari let Google install a cookie on the user's phone.

Google halted the practice once it was reported by the Wall Street Journal, but argued that the tracking was unintentional and did not harm consumers. However, that didn't wash with the U.S. Federal Trade Commission, and the company was forced to pay a record $22.5 million fine over its use of the tactic.

No any mention of any gate, no too much media publicity, media doesn't seem to care much, except few stories here and there.
Score: 23 Votes (Like | Disagree)

I'm so sick of Google's business model, and their sheer lack of concern for data privacy. I understad tracking isn't just limited to FB and Google, but they seem to be leading the way. I'm glad I've shut down and deleted both FB and Google accounts. As well as deleted all of their Apps from my iOS devices.

This isn't your normal tracking. This is typical intrusive spyware behavior.
Score: 23 Votes (Like | Disagree)

Skeptical.me
I'm so sick of Google's business model, and their sheer lack of concern for data privacy. I understad tracking isn't just limited to FB and Google, but they seem to be leading the way. I'm glad I've shut down and deleted both FB and Google accounts. As well as deleted all of their Apps from my iOS devices.
Score: 21 Votes (Like | Disagree)

Perhaps if there were a "GoogleRumors.com" site there might be. Given this is an Apple-focused site, it's hardly surprising it's so focused on good and bad Apple news.

Having read the original article, it's very light on details as to why it was blocked. If these companies aren't held accountable, they've shown time and again they don't have any 'conscience' of their own.

You missed the point by a mile. This has nothing to do with Mac Rumors, I am talking about media as whole.

It wasn't the MacRumors who started the gate nonsense, but tech YouTubers. Same tech YouTubers who are very loud when Apple does something bad, but surprisingly silent when Google keeps doing absolutely disgraceful things over and over.
Score: 18 Votes (Like | Disagree)

Thank goodness the UK courts are pragmatic and deal in common sense.

Same as every time Google is caught doing something absolutely horrible. *Crickets chirp and tumbleweed rolling.*

No any mention of any gate, no too much media publicity, media doesn't seem to care much, except few stories here and there.

That's the thing that baffles me, the lack of concern by the general public. They seem to either not understand the ethics that apply to such intrusion or simply don't care.
[doublepost=1538996695][/doublepost]

This isn't your normal tracking. This is typical intrusive spyware behavior.

Agreed. Certainly is.
Score: 13 Votes (Like | Disagree)
Read All Comments