Users can now relocate the Sound Library to an external storage device if desired, and Smart Tempo is able to analyze tempo data across multi-track recordings to define a Project Tempo. Smart Tempo also now analyzes the tempo of MIDI performances recorded without a metronome, and a new mixer mode lets channels strip fader and pan controls. 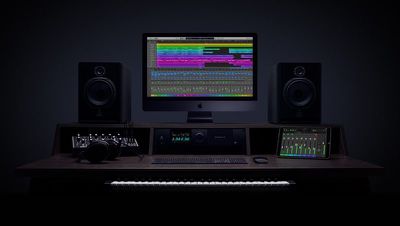 A full list of everything that's new in the Logic Pro X update is below:

Apple has also updated MainStage 3, which accompanies Logic Pro X and is designed to turn the Mac into a live rig. A long list of new features have been added to MainStage, as outlined in the release notes listed below:

General
- Channel Strip MIDI input inspector allows any MIDI CC data to be filtered, transformed or passed through
- Text notes can be added to the bottom of channel strips
- The Metronome is now fully configurable, with separate settings for Bar, Group, Beat, and Division
- This update also contains numerous stability and performance improvements

MainStage 3 can be downloaded from the Mac App Store for $29.99. [Direct Link]

JimmyJimmyYam
I love Logic Pro X, it’s the main reason I have a Mac. There really is nothing else like it.
Score: 15 Votes (Like | Disagree)

petsounds
Honestly I feel like Logic Pro is some of the most impressive and user-focused software Apple is making these days. It's such a relief that Apple still sees its professional Mac apps as a priority for the company.

I never understand though why MacRumors relegates Logic Pro announcements to the Mac blog when every tiny iOS announcement gets front page treatment.

UI of Logic out of place now with dark mode. Needs darkening.

This seems to happen with every update. I believe the Logic team is still based in Germany, and it's always seemed that they're not really included in the loop about upcoming OS features. I imagine in the next update we'll see Mojave feature support.
Score: 9 Votes (Like | Disagree)

Cheers guys I got mine.

Ah man don't tell me I'm gonna have to delete it and redownload it to get an update. I've looked at the release notes and it was 17 hours ago.

Are you on Mojave?

EDIT: I went to the "Updates" tab on Mojave and pressed CMD + R a few times. Refreshed the search and it's there, if anybody else is having the same problem. Didn't work by CMD + Q'ing & reopening, but CMD + R's your girl.

dspdoc
Glad to see that Logic is not being abandoned by Apple!
Score: 5 Votes (Like | Disagree)

keysofanxiety
Thanks for the heads up guys, wouldn’t have known otherwise.

Sadly, not showing for me as of yet... I was hoping the App Store on Mojave would be a bit faster. Still saying no updates. Even searching it in the App Store just says “Open”.

Waiting just a few minutes for an update to become visible is like waiting for a pizza when it’s passed the expected delivery time. It’s never usually long from there but boy is it frustrating.

Thanks for the heads up guys, wouldn’t have known otherwise.

Sadly, not showing for me as of yet... I was hoping the App Store on Mojave would be a bit faster. Still saying no updates. Even searching it in the App Store just says “Open”.

Waiting just a few minutes for an update to become visible is like waiting for a pizza when it’s passed the expected delivery time. It’s never usually long from there but boy is it frustrating.