iPhone XS, iPhone XS Max, and Apple Watch Series 4 have started rolling out in Australia and New Zealand where it is after 8:00 a.m. on Friday, September 21, and in other countries, as the launch date approaches, customers are queueing up with the hopes of purchasing one of Apple's new devices.

At the Orchard Road store in Singapore, where the new smartphones and watches will be available in a few hours, hundreds of people are waiting and have been camped out since much earlier in the day. 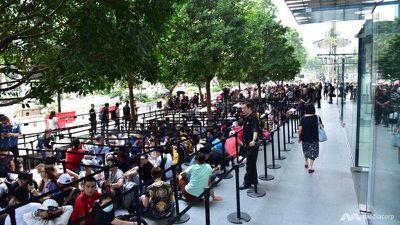 Image via Channel News Asia
It's hot in Singapore, so potential customers have been provided with numbered wristbands to mark their place in line and are allowed to leave for up to one hour for meal breaks.
There's a similar scene at Apple's Berlin store, where customers have been lining up overnight. Berlin customers still have several hours to wait before the new devices are available in the country.

Customers in Austria are also lining up to get an iPhone XS or iPhone XS Max, but with hours to go, the line is still small.

Most U.S. stores don't appear to have significant lines, but people will likely start lining up late at night as the launch date approaches.

Apple's iPhone XS and XS Max were not particularly constrained when pre-orders launched, but some iPhone XS Max models began selling out for launch day shipments within about a half hour of when pre-orders went live. Apple Watch Series 4 models were harder to come by and sold out quickly.

Orders placed for iPhone XS, XS Max, and Apple Watch orders from Apple today will not ship out until October, which is likely why many customers are trying their luck waiting in line for a walk-in purchase.

Customers in the United States who did not pre-order and who are hoping for a launch day device should get to an Apple retail store or carrier store as early as possible.

Are you planning to wait in line for an Apple device this year? Let us know in the comments.

droog
People still do this? Yikes...
Score: 75 Votes (Like | Disagree)

Waiting in line for a phone or watch, it's just sad.

No it’s not. I wouldn’t do it, but it’s not sad. It’s what they want to do, with their free time, and they will use their money for it. Some people stay in line for hours to watch a football game (which may be even on TV) or a concert, and some people will even pay otrageous amounts for it.
Score: 45 Votes (Like | Disagree)

Reapro
Waiting in line for a phone or watch, it's just sad.
Score: 30 Votes (Like | Disagree)

MrGimper
Stop dissing people who queue. I don’t personally, but people do and it’s up to them. Many like the shared experience and the fun of doing it. Why go to a live sports game when you can watch it on TV...
Score: 27 Votes (Like | Disagree)

macduke
I want to see someone in line with a notch haircut. Pretty please?
Score: 21 Votes (Like | Disagree)

madKIR
Next year the new iPhone at only $1999 lol
Score: 16 Votes (Like | Disagree)
Read All Comments